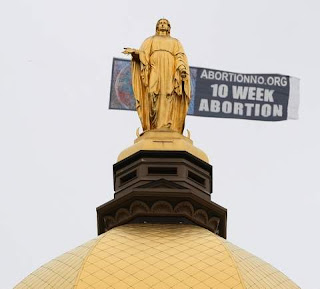 HELP KEEP THE PLANE IN THE AIR!!!

No law against abortion protest photos
Some residents upset by graphic images on trucks, banners.

SOUTH BEND -- Lynn Nemeth was driving across town last week with her 3 1/2-year-old granddaughter when a big truck adorned with pictures of aborted fetuses pulled up beside her car.

"It wasn't a bloody hand," said Nemeth, very upset at what her granddaughter had seen.

Nemeth, who lives in Granger, said several school buses carrying children who could see the trucks were also nearby. She said the parents of those children monitor their televisions so they won't see that kind of thing, but they couldn't protect their children while they were on those school buses.Nemeth isn't the only local resident upset about the pictures on trucks and on banners towed by airplanes in the sky recently.

The images are part of protests over President Barack Obama's scheduled appearance May 17 at the University of Notre Dame commencement. The truck and airplane banner displays are staged by the Center for Bio-Ethical Reform, a California-based organization.

The group doesn't intentionally display the graphic abortion photos for children to see, but sometimes that can't be avoided, Harrington said Saturday. The group tries to avoid driving the trucks by elementary schools and day care centers, he said.

"There is no way to completely eliminate children from seeing the banners. We decided long ago that is an unfortunate tradeoff," he said.The group displays the photos because the mainstream news media are part of a cover-up by refusing to show the results of abortion, Harrington said.

"Social reformers have always used graphic images to dramatize injustice," he said. "We are trying to get people to hate abortion. If they hate us, too, that's a tradeoff we're willing to make."

Harrington describes himself as nondenominational evangelical Christian. He said he's been a guest speaker twice in the past at Notre Dame conferences organized by pro-life student groups. He described his group as nonviolent and nonpartisan.

Harrington said other communities have attempted to ban his group's graphic displays, but the Center for Bio-Ethical Reform always has won in court based on freedom of speech grounds.