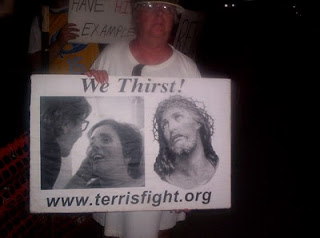 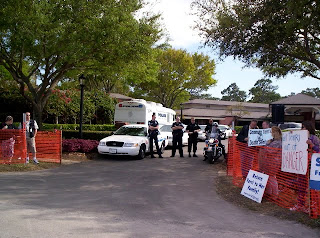 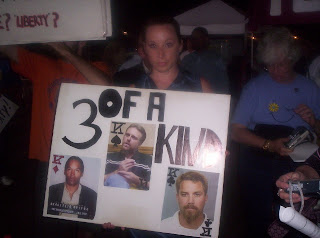 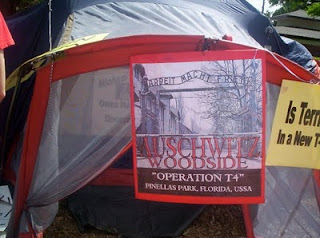 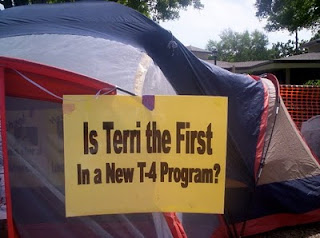 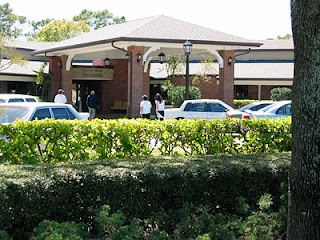 ANOTHER COURT SUPERVISED VISIT
Posted by Leslie at 11:54 AM No comments: 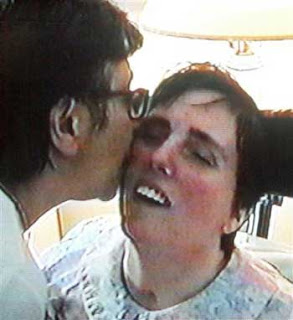 March 31, 2005 – “Mine eyes have seen the Glory of the coming of the Lord,
he has trampled out the vintage where the grapes of wrath are stored. He has loosed the fateful lightening of his terrible swift sword, HIS truth is marching on”. . . Battle Hymn of the Republic.

The events of the past month have been a microcosm of the 15 year long struggle of the wonderful Schindler family to help their beautiful daughter and sister, Terri survive what seems to be a massive Pinellas Park, FL conspiracy against her life.

The agony I have experienced these few intense weeks, watching this court ordered execution, is miniscule compared to those who have loved her, have cherished her smile, her struggle to communicate, her touch. They have taught us well the notions of nobility, compassion, dignity, as well as fighting to the bitter end to save a life.

Against all odds, their loved one became an international celebrity and, like another with no such desire, Terri Schindler became the Roe v Wade of the euthanasia movement. Her state-sanctioned, court ordered starvation and dehydration murder had to be successfully achieved – and so the "powers that be" backed down from the fight for an innocent woman and the future of our nation.

It has been my privilege to have been involved in the biggest epic struggle of my lifetime, trying to spare Terri’s life and allow her to receive the therapy she so richly deserved.

My photos – taken at Hospice Woodside – captured this travesty and the thousands who tried to stop the madness. Never before in U.S. History has this heinous act been perpetrated upon an innocent woman, who had committed no crime. Our nation will pay a price. This bitter saga - carried out on the public stage for 14 days, culminated during Holy Week. The struggle separated the wheat from the chaff. The leaders of our country feigned sorrow about this “tragic situation” but were found severely wanting when it came to really saving a life.

A mother’s love for a baby she has carried never fades and can never be destroyed. Mary’s love was beyond measure – her dedication to the life she brought forth into this world has taught us all about the never ending quest to protect that life, despite the incredible cost. Her opponents have taught us about the macabre, the depraved and the demented.

Michael Schiavo plans to bury Terri’s ashes in Pennsylvania, once the evidence of possible abuse has been eradicated. The Lord, however, works in mysterious ways.

God have mercy upon the soul of this land!
Posted by Leslie at 10:32 AM No comments: