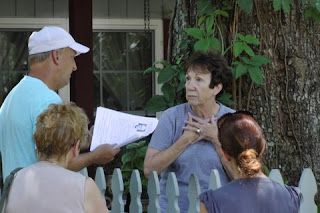 Abortionist Randall Whitney Kills innocent little baby boys and girls at Orlando Woman’s Center (OWC) several days a week. Friday, the neighborhood alert team paid a visit to his community. He lives in Port Orange about a mile from the ocean on a cul de sac in an upper middle class house complete with a white picket fence. The streets are lined with gigantic live oaks laden with Spanish moss giving the Sugar Forest sub divisions a mystical storybook feel. Mrs. Whitney walked outside and stood with her two big dogs behind the whitewashed fence to confront Pastor Mark Holick with the fact that her husband is a physician. Her fence may be whitewashed but Mark would not allow her to whitewash Randal’s nefarious occupation. She spoke with pastor Holick for about five minutes but only to convince him that her husband is a fine man. Pastor wasn’t buying it.

Imagine my surprise, when at the end of the OSA church service on Friday night I realized abortionist Whitney was sitting right in front of me. When he got up to walk out just before everyone else, I followed him and asked him if would be willing to talk to me, he answered, “Sure”. He is usually willing to talk to the sidewalk counselors at OWC so it wasn’t a surprising turn of events.

I asked him what he thought of the service, he responded, “It was powerful.” "Do you believe that Jesus died for your sins?" I asked. He said that he didn’t believe that anyone could die for anyone else’s sins. He said that he believes in a god, but a god that is only love. I explained to him if his god loves the rapist and the raped there is no love, just chaos. Jesus loves intensely and he hates those who come against what he loves. I explained that He is always ready to forgive but he is also just and holy. Ps. 5:5, 7:11

Whitney believes in evolution so I asked him about his conscience. I explained, “In order for something to evolve it must have at least a cell, the conscience does not.” He agreed. Then I explained that God wrote the law on our hearts and that knowledge has no cell, or atomic weight. No scientist in the world can explain how all people everywhere innately know the difference between right and wrong. Then I explained to him that God gave him a conscience because thats where God goes to talk to us. I looked him in the eyes and said with conviction, “That is why the first time you killed a child in his mother’s womb, you knew it was wrong.” It was one of the few points I made with the 77 year old abortionist that he did not have an answer for, he just let it go.

He told me that the Bible says nothing about the child in the womb. I quoted Exodus 21:22, “"If men strive, and hurt a woman with child, so that her fruit depart from her, and yet no mischief follows: he shall be surely punished, according as the woman's husband will lay upon him; and he shall pay as the judges determine. And if any mischief follow, then thou shalt give life for life, eye for eye, tooth for tooth, hand for hand, foot for foot, burning for burning, wound for wound, stripe for stripe."

He seemed a little shocked at that, but quickly regained his composure and with a superior attitude asked, “You believe in a god like that?” I answered you bet I do. He asked me if I’ve been watching what’s going on in the world. He said that the new democratic rule was leading the world to peace. He was very excited about it. I explained that salvation will not come from legislation. It’s a free gift and it comes from Jesus.

When talking about his abortion practice he said that he believes that he is truly helping women. He says he, “Really loves women.” And that he KNOWS that he is helping them. He refuses to listen to anything to the contrary. Our conversation went on for twenty minutes and what is interesting to me is he sees himself as a messiah of sorts, helping women in these tough times. But at the same time reality has smacked him up side the head lately. He slapped a woman in his office recently and he was arrested for it. He was called to testify at Scott Pendergaft’s trial this past week and he was probably the key witness to sink his colleague.

Whitney is not board certified in 7 critical fields and Pendergraft left him alone with a patient and went home. She complained that they would not give her anything for pain and then left the office, went to a hospital and delivered a child severely damaged by the botched abortion. Finally, he recently had surgery to insert a pacemaker. His whole image of himself may be
shaken and this may be an opportunity to shine the light of Jesus through the cracks in his facade. 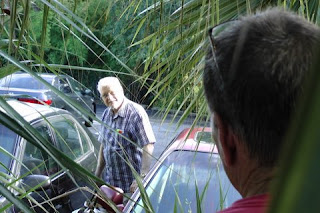 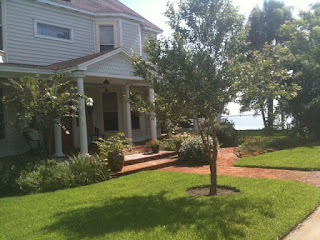 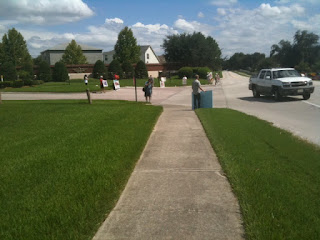 On July 18, 2011 a team of 30 Operation Save America pro-life Christians turned their theology into biography by taking the ugly truth of abortion posters to the Eaglebrooke subdivision in Lakeland, Florida.

The beautiful mansions behind gated walls at Eaglebrooke are a testament to the hard working families in this town an hour SW of Orlando .

Until yesterday, abortionist James Gelenbach’s neighbors were likely blissfully unaware of his profession.

James Gordon Gelenbach is, sadly, a hired gun who operates at the following Orlando death camps:

Following our pro-life witness, yesterday, the vast majority of his neighbors in the ritzy enclave are now very aware that his incredible home was purchased with blood money ~ from the fees Florida women paid him to murder their babies.

A car load of our missionaries to the pre-born distributed fliers to the neighbor’s homes before we set up shop outside the gates. When the local police arrived, they were exceptionally fair and even handed with our First Amendment rights, much to the fury of the security guard who had been cursing us and assuring us that the police would force us to leave.

One dear Grammy driving out of her community said, "Thank you for being here ~ “It’s murder”! At least 25 other neighbors driving home from work or to the store, took our flyer as they went to and fro.

For some inexplicable reason, Gelenbach decided to jump in his car and speed out of the comfort and security of his home, just before our protest was over. 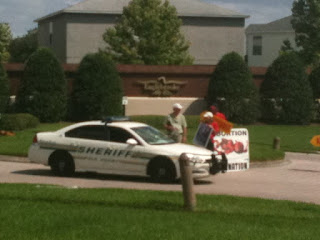 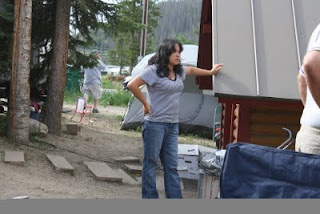