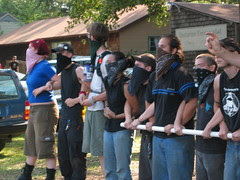 WELCOME TO THE UNITARIAN UNIVERSALIST CHURCH, JACKSON, MISSISSIPPI!
Posted by Leslie at 4:10 PM No comments: 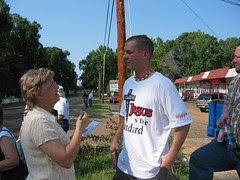 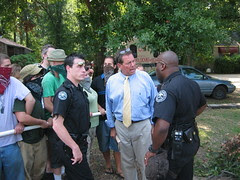 Pastor Flip Benham says, "Just do your job!"
Posted by Leslie at 4:08 PM No comments: 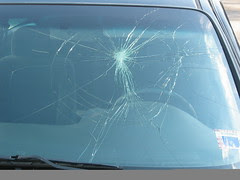 IMG_1796
Originally uploaded by lesforlife.
Who perpetrates the violence?
Posted by Leslie at 3:22 PM No comments:


A team of Operation Save America (OSA) evangelists and pro-life activists attempted to attend the Unitarian Universalist Church of Jackson this morning and were greeted by a phalanx of anarchists obstructing the entrance to the “church.”

Adam and his girlfriend Paige, from Kannopolis, North Carolina, had just driven into the church parking lot when the unruly mob piled on the car and began beating it with PVC pipe and bashing the windows with their fists.

Colorado Right to Life VP, Leslie Hanks ran to a squad car parked across the street and asked the individuals inside why they couldn’t do something to stop it. A gentleman who
identified himself as an observer for Hinds County stated that it was private property and
that no one had filed a complaint.

Peter Haik who claimed to be a local member of the church came to the OSA side of the street and stated that although he disagreed with their members, he supported their right to be there. OSA activists requested that he make that statement clear to the Jackson police officers. Mr. Haik told OSA that the anarchist team was not part of the church and that he supported their arrest. Nonetheless, nothing was done to the violent protestors standing with the National Organization of Woman (NOW,) in opposing the OSA presence in Jackson.

OSA street preachers faced clanging pots and pans and shouts of “turn the speakers off, as they tried to share the Word of God with the crowd.

Constitutional rights appeared to be on hold as the Jackson police department stated
that because the anarchists wouldn’t cooperate and give names, nothing could be done
to the individuals who had just perpetrated an assault, resulting in a smashed windshield
and seriously dented car.

Operation Save America’s founder, Flip Benham asked the police to just do their jobs and noted, “We intend to continue storming the gates of hell and praying for the end of the wicked practice of abortion in Jackson until babies are safe in their mother’s wombs.”

To this point, no formal complaint has been filed, although Adam Tennant filled out
a two page chronicle of how his car was attacked and damaged.

Pro-life stalwart, Ken Scott of Denver, requested that a police supervisor be called to weigh in on the matter of whether assaults are allowed on private property in Jackson, Mississippi.

Officer Jenkins stated that a supervisor would be called but none ever showed up to
address the injustice.

The Word of God was preached over loudspeakers to the lost by Pastor James Kitchens, with Jackson’s The Church of the Lord Jesus Christ. Several post abortive women told their stories but were shouted down and mocked as they tried to share the truth of how abortion hurt them personally.