At last week's No on 62 pep rally for death, the same usual suspects gathered on the west steps of the Colorado State Capitol to
bemoan how "dangerous" and "deceptive" personhood for "fertilized eggs" will be.

New on the scene, however, was a woman introduced as the Reverend Dawn Riley Duval. It would seem that she has been recruited to rebut the claims of chilling parallels between slavery and abortion that Amendment 62 spokesman, Pastor Walter Hoye, has been making all over Colorful Colorado. As founder of the California Civil Rights Foundation, Hoye has a deep abiding faith and vested interest in educating his people about the radical, racist and eugenic history of Planned Parenthood. 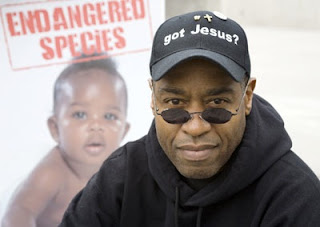 So it was especially jarring to hear Ms Duval begin her rant with, "This is the day that the Lord has made." One doesn't
anticipate hearing the name of Almighty God invoked at a pep rally for death.

Duval continued, "This deeply personal and painful moral decision is best left to a woman," said Rev. Dawn Riley Duval of the African Methodist Episcopal Church, "And her doctor and God!" she shouted to loud applause.

We must assume that this newest Planned Parenthood spokeswoman has not heard the statements of PP's founder, Margaret
Sanger.

Of particular interest to the black community should be this disturbing message, ""We do not want word to go out that we want to exterminate the Negro population," she said, "if it ever occurs to any of their more rebellious members."

Colorado Right to Life has a long history of sharing this kind of insidious racial profiling by the abortion industry. We brought
Reverend Clenard Childress to address the Ministerial Alliance in 2006 and while his message largely fell on deaf ears, he planted seeds and so Pastor Hoye has been warmly received by several prominent Black churches in Denver.

Pastor Hoye will be speaking at a prayer rally at Rising Star Missionary Baptist Church in Aurora on September 17, 2010 sharing his message of Persons not Property and Why we Can't Wait to legally protect everyone made in God's image.

We will be delivering the DVD Maafa 21 to Ms Duval's pastor, with the prayer that the message of how abortion is decimating the black race and carrying on the legacy of death and destruction of the slave master mentality, will be shared.

Should the church be receptive to learning why personhood is the key to equality of justice for all ~ born and unborn,
we'd welcome Dawn's fiery passion to protect her people from those who have targeted them for extermination.
Posted by Leslie at 6:41 AM No comments: