The emotions surrounding the murder of five girls at an Amish school in Pennsylvania were still raw Monday when the "CBS Evening News" put on a commentator who blamed such violence on abortion and "expelling God from the school."

Brian Rohrbough, who lost his son in the 1999 Columbine school massacre in Colorado, made the remarks on the "Free Speech" segment, which for the past month has provided a 90-second platform for pundits, politicians and ordinary people to sound off.

The decision to approach Rohrbough and air his views prompted a storm of criticism, some of it within the ranks of CBS News. Anchor Katie Couric responded on her network blog, saying: "We knew when we decided to put on this segment that a lot of people would disagree with it. We also knew some might even find it repugnant.

"But that is the very essence of what we're try to do with the 'Free Speech' segment. This is a platform for our viewers to hear from a wide range of people -- those who may share your views, and those who don't."

Rohrbough, who addressed the Colorado Right to Life march in January, has blamed the Columbine attack on abortion in a number of local interviews. He filed a lawsuit alleging that a Denver police officer shot his 15-year-old son in the confusion of the Columbine attack. Rohrbough apologized to the officer in a Rocky Mountain News interview after an independent investigation concluded the officer had not yet arrived at the school when Rohrbough's son was shot.

Rohrbough also sued the school district over its refusal to allow him to include religious references in two four-inch tiles that are part of a Columbine memorial.

In his CBS commentary, Rohrbough said: "This country is in a moral free fall. For over two generations, the public school system has taught in a moral vacuum, expelling God from the school and from the government, replacing him with evolution, where the strong kill the weak, without moral consequences and life has no inherent value. We teach there are no absolutes, no right or wrong. And I assure you the murder of innocent children is always wrong, including by abortion. Abortion has diminished the value of children."

Rome Hartman, the newscast's executive director, said he was "surprised" by Rohrbough's remarks and "of course I knew that his remarks would be controversial, perhaps even offensive to some. I also knew that some people in our audience would agree with him. I also thought to myself, 'This is "Free Speech." We don't tell people what to say or what to think.' . . . I decided to run the segment."

Some online critics denounced CBS. A blogger at Dymaxion World wrote: "Grief makes people do, and say, stupid . . . things. But CBS is not grieving for anyone. What made them put this man on national television?"

Many detractors wrote to CBS's Web site. One called Rohrbough's remarks "the biggest load of hogwash I have ever witnessed. How could you use an unspeakable tragedy to give a rightwing flat earth nut job a podium?"

But a mother of three wrote to praise CBS's "courage," saying: "I'm sure that you will receive many e-mails denouncing your segment, but I appreciate hearing a 'conservative' view in what can be a very liberal media."

The Rocky Mountain News (Oct. 5, 2006, p. 10D) quoted Cecile Richards, national president of Planned Parenthood, saying, "I've never backed down from a fight, and I'll be damned if Bush, Alito, and Colorado Right to Life are going to take away a woman's right to choose."

"We accept the fight," said Columbine dad Brian Rohrbough who was elected to the board of Colorado Right to Life in September. "A web search shows that Richards, the president of the largest child-killing business in America, commonly uses the phrase, 'I'll be damned,' and unless she repents, she’s right on that."

"Abortion is always wrong," added Rohrbough, "and Colorado Right to Life is not out for waiting periods, or parental consent, we’re out to stop the killing of unborn children." 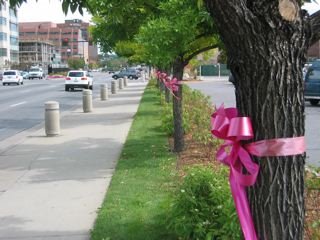 
One week before the Denver Race for the Cure, Susan G. Komen Foundation race officials met with several directors of Colorado Right to Life
on September 29, 2006.

Dr. Brind is President of the Breast Cancer Prevention Institute: www.bcpinstitute.org. and is considered the world’s foremost expert on the abortion breast cancer link. Dr. Brind decried the notion of funding Planned Parenthood, because abortion and dispensing steroidal agents for birth control are the two greatest contributors to the breast cancer epidemic, which has risen 40% since the Roe v Wade decision. Dr. Brind has stated that Planned Parenthood operates the “largest chain of human slaughterhouses in the nation.”

"SGK officials did not appear to have knowledge of simple breast facts and were more concerned about assisting women after they had contracted breast cancer, than informing them to avoid breast cancer risk by avoiding abortions and having early, full term pregnancy with breast feeding. This is an appalling lack of concern for the women The Susan G. Komen Breast Cancer Foundation is supposed to be helping," said Silver.

Colorado Right to Life was grateful for the opportunity for “dialogue,” and to discuss information regarding the physiological pathway of breast cancer with SGK officials. Eve Silver explained that the breast is an organ that is not mature at birth. SGK appeared to be surprised to learn that the breast does not become fully mature until after 32 weeks of pregnancy, so that interruption of pregnancy before 32 weeks, leaves breast cells exposed to estrogen, which is highly carcinogenic. (http://stopabortionbreastcancer.org).

It is the fervent hope of Colorado Right to Life that the Susan G. Komen Foundation will take the information that Eve Silver, Dr. Brind and CRL shared, to the women who need to know. Women must be told the truth about the abc link, in order to protect themselves from this deadly disease. www.abortionbreastcancer.com
Posted by Leslie at 7:40 AM No comments:

By Mary Shepherd, Davenport
My mother, a Rock Island native, died of breast cancer June 10, 1977. She was 42, the age I am now. I intended to sign up for the Quad-Cities Race for the Cure in her memory, which falls on the 29th anniversary of her death. Then I discovered its link to Planned Parenthood.

In honor of Mom, I am writing this letter. Mom was very vocal about her beliefs. She would call radio talk shows and write her Congressmen. She was critical of charities that abused money entrusted to them and would be appalled that the Susan G. Komen Foundation provides grants locally and nationally to Planned Parenthood.

Planned Parenthood makes money by persuading people to kill their unborn children. It does not educate their victims on the lifelong physical and emotional repercussions of their decision.

The Susan G. Komen Foundation alleges funds are to be used for screening, not abortion services (another shell game), and it tries to discredit studies that show a link between abortion and breast cancer.

If you have any doubt about the relationship between the foundation and Planned Parenthood, I encourage you to research it on the Web.

Davenport
Posted by Leslie at 7:37 AM No comments: