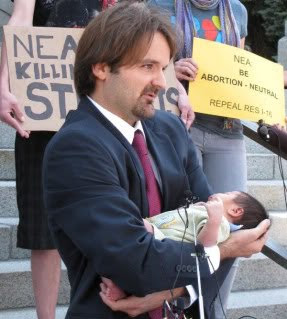 This is a more coherent recap & expansion on my earlier blog post on regulations, and why they undermine the Personhood of the unborn child -- "How We Compromise Ourselves."

I do not question the well-meaning intentions of those legislators who support, or even write, compromise legislation which tries to put limits on abortion in circumstances where a total abortion ban is not realistically possible. We can argue later about which is more "politically realistic" (I think Personhood is, still). But the fact that I believe in the good intentions of the pro-life regulators does not mean that I don't care whether they stop pushing regulations -- I do! -- or that I approve of what they're doing -- I don't! -- or that I will always continue to support regulation-minded legislators if they continue to ignore warnings about the unintended consequences of what they do.

I think the main thing “pro-life regulators” need to understand is that, whether or not Personhood is "practical" in a legal sense (which is the main objection of those pro-lifers who oppose the Personhood strategy, including Archbishop Charles Chaput and Clarke Forsythe of AUL), our primary problem as pro-lifers is that we've been making the wrong argument -- one which won't "change peoples' hearts" (which everybody agrees is the goal, and yet incrementalists are convinced they DO have the right argument).