He's known locally for his unusual habit of wearing a ghoulish mask to hide his face as he drives to "work"presumably moonlighting for some extra cash.  Since he has a respectable OB GYN practice, albeit one which also does abortions, at two locations in Denver, one would think he makes a comfortable living.  In the words of Life Dynamics, "Abortionists are the bottom-feeders of the medical profession," which begs the question why?

Tony Massey, Denver videographer, regularly captures the ironically named Good~man as masked
marauder and created an enlightening video with the Doc promoting his Mile High OB/GYN practice superimposed with footage of his alter ego ~ abortionist "Goodman" in a Jason mask. 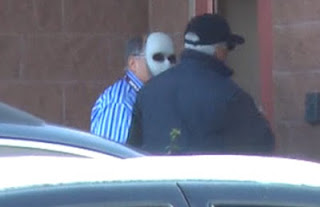 Today, not long after the masked man arrived, an ambulance and fire truck were called to Rocky Mountain Planned Parenthood.  Calls to clarify the nature of the 911call, which should have
summoned the emergency vehicles, were unfruitful.  "No 911 calls were made" was the explanation the caller received.

A recent guest post by OR's Cheryl Sullinger at Jillstanek.com chronicles a rash of botched abortions ~ 10 in the past 20 months around the nation at Planned Parenthood clinics.