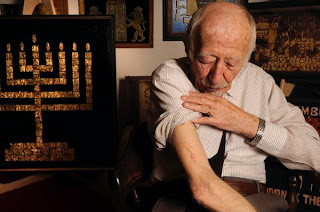 "Martin's reverence for life and joy for living are imbedded in every sentence."

Changing hate to love
A Holocaust survivor eases his pain by sharing a message of hope with Colorado
By Electa Draper
The Denver Post
Article Last Updated: 05/12/2008 06:08:43 AM MDT


Martin Small shows a bullet wound from an escape attempt long ago. "People here listen to me," Small said of Coloradans. "The Holocaust changed one word, love, to hate. People here changed hate to love." (Helen H. Richardson, The Denver Post )
Martin Small says he feels an indescribable mixture of dread and eagerness in remembering and retelling his stories of the Holocaust.

In the five years he has lived in Broomfield, the 91-year-old artist says, the people of Colorado have embraced his stories and changed his life.

"People here listen to me," Small said. "The Holocaust changed one word, love to hate. People here changed hate to love."
Small's wife of 57 years, Doris, is also also a survivor of the Nazis' effort to exterminate Jews during World War II.
The couple moved to Colorado from New York in 2003 to be near their daughter, grandchildren and great-grandchildren. Family, he said, is everything to him

To his amazement, his Colorado family grew to include Catholic scholars, evangelical clergy, students of all stripes— an ever-expanding community embracing him as messenger.

In 2007, Regis University, a Catholic Jesuit institution, honored Small as Civis Princeps, or First Citizen.
One of Small's large artworks, one celebrating the unity of Jews and Christians, stands in the foyer of the Faith Bible Chapel in Arvada."Martin and Doris are a blessing to us," said Steve Small,a member of Faith Bible and no relation. "I have come to know God better through Martin."

Small, born Mordechai Schmulewicz in the Polish village of Molczadz in 1916, saw his world collapse under Nazi occupation.
"I was a farmer. We lived with the gentiles like brothers," Small said. "Overnight they became the collaborators of the Nazis. Why did my best friend from school start calling me 'Dirty Jew?'
"That's a question no one can answer."

By age 25 Small had experienced threats of torture and death by boyhood chums.