Not everyone is hooting and hollering about the 20 week abortion ban passed yesterday by
The Texas House of Representatives.

While the temps soared to the boiling point this month over the proposed restrictions on Texas females "right to kill," pre-born Texans remain as vulnerable as ever to the abortionists' long knives.

Get to the kill mill early enough and the little resident in utero can be sliced and diced and flushed away, before he or she is old enough to feel pain ~ so say the wise Texan Representatives.

Nary a thought about the oath they swore to uphold the constitution, it would seem.

While the low information voters can be expected to ignore the lofty principles America's founders gave their all for, one should expect more from those who campaign on protecting human rights, including Governor Rick Perry, who as a presidential candidate in 2012 told Rebecca Kiessling he was a champion of Personhood. All hat ~ no cattle.

Well, all y'all, your fetal pain law isn't progress.

America's Party presidential nominee, Tom Hoefling has proposed language which would actually curtail the shedding of innocent blood in the Lone Star State.

"Texas law already recognizes what is self-evident, that the child in the womb is an individual person:

(26) “Individual” means a human being who is alive, including an unborn child at every stage of gestation from fertilization until birth.

(49) “Death” includes, for an individual who is an unborn child, the failure to be born alive.

TITLE 5. OFFENSES AGAINST THE PERSON

(b) A person commits an offense if he:

(1) intentionally or knowingly causes the death of an individual;

(2) intends to cause serious bodily injury and commits an act clearly dangerous to human life that causes the death of an individual; or

Sadly, when Rick Perry and the “pro-life” Republicans put that section in the Texas Code a decade ago, they also put in this:

APPLICABILITY TO CERTAIN CONDUCT. This chapter does not apply to the death of an unborn child if the conduct charged is:

(1) conduct committed by the mother of the unborn child;

(2) a lawful medical procedure performed by a physician or other licensed health care provider with the requisite consent, if the death of the unborn child was the intended result of the procedure;

(3) a lawful medical procedure performed by a physician or other licensed health care provider with the requisite consent as part of an assisted reproduction as defined by Section 160.102, Family Code; or

So, all they have to do is strip out the latter portion, and voila, abortion is illegal everywhere in Texas.

Don’t be deceived. The current bill being considered makes this situation even worse. It walks all over the first section, which is good, by creating a sub-class of sub-humans, based on the arbitrary and unreasonable notion that they can’t feel pain.

Please, don’t offer support to lawless laws that codify permission to murder innocents. All it does is surrender the moral, constitutional and legal argument against abortion.

Which assures the continuation of abortion on demand.

We now have forty years of experience, and fifty five million dead children, to prove it."

T Russell Hunter, founder of AbolishHumanAbortion.com & Churchrepent.org has weighed in with his pithy impression of the PLM effort in Texas ~

"Do not confuse our opposition to the Fetal Pain Ideology as implying that we are somehow opposed to saving as many babies as we can everyday as we work toward the eventual goal of abolition.

To think that our opposition of the it's-okay-to-kill-your-baby-so-long-as-you-do-it-before-they have-been-alive-140-days Bill means that we aren't trying to save babies on a daily basis like Oscar Schindler or Corrie Ten Boom is unfounded and ridiculous.

The babies that have been saved over the past 40 years have not been saved by legislative regulations or incremental abortion bans. They have been saved by faithful counselors calling out to women at the "clinics," faithful family members and friends holding their loved ones back from the slaughter, and faithful warriors and debaters crying aloud in this culture of death in hopes of changing individual hearts and minds.

We work every day in many ways to save children from the jaws of death and our abolitionist ideology and strategy does not confine us to saving ALL or none. That is a ridiculous misunderstanding of our views.

PS: Oscar Schindler did not save Jews by passing bills that said most of them had to die so that some of them could be saved. The Boom family did not protect Jews by passing legislation that freed the Jews who would die painful deaths in the concentration camps but left the rest to be worked as slaves."

Rick Perry and the God-fearing people of the allegedly most free state in the union still have time to reverse the carnage wrought by Texas attorney, Sarah Weddington.

End the shedding of innocent blood for EVERY human being, at EVERY stage of development.
Stop crimes against humanity! 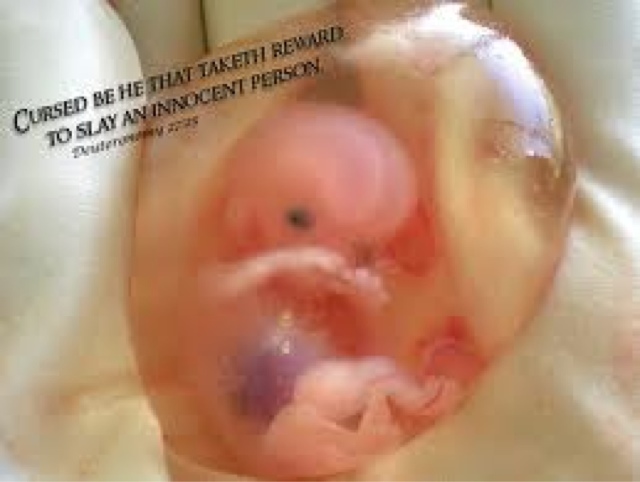 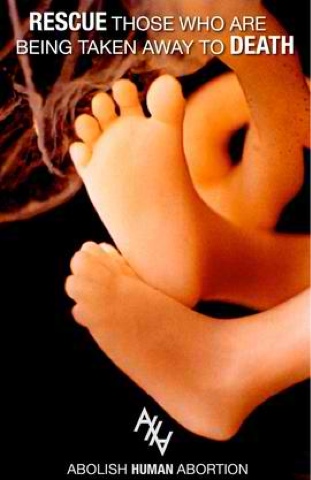 Posted by Leslie at 6:26 AM No comments: