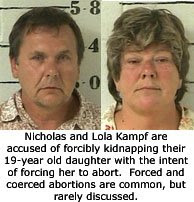 The Elliot Institute has released a report that exposes America's forced abortion epidemic.

Elliot Institute spokesperson Amy Solby tells OneNewsNow that one study found 64 percent of women who had abortions reported they felt pressured to abort by others. "Something like 80 percent of them said that they didn't get the counseling they needed to make a good decision, that often they were not given counseling at all, or that the counseling they had was inadequate," she explains.

Solby also mentions forced abortions, which are not widely discussed in the U.S. An article released from the Institute cites two cases in 2006 in which teenage girls were violently persuaded to have abortions. In Maine, a couple abducted their 19-year-old daughter, bound and gagged her, and drove her to New York for an abortion. However, she escaped from her parents in the parking lot of a store and called police from her cell phone.

That same year, a Georgia mother forced her pregnant 16-year-old daughter to drink turpentine in hopes of aborting her baby. She was later arrested for criminal abortion after her daughter told the school counselor about the incident. The Institute has studied other cases where women are commonly threatened, pressured, or subjected to violence for refusing to abort.

"There's not any necessarily real hard numbers on violent [coercion] but, if you consider that homicide is the leading killer of pregnant women according to several studies, and then the fact that a large number of them have to do with the fact that the woman was killed or assaulted...because she refused to have an abortion or in an attempt to force her to abort," Solby concludes.

The Elliot Institute is trying to convince states to pass laws forcing abortion facilities to screen women for coercion and not to do an abortion where coercion is involved. Solby believes women then could be helped with whatever situation they are facing.
Posted by Leslie at 8:40 AM 1 comment: