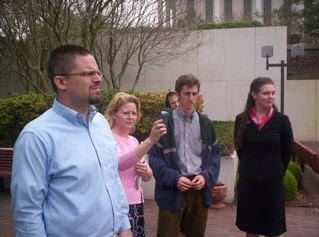 How many are ever given this kind of favor from above?

"I stood about 15 feet away. I prayed she would call on me. I stood with the sun in my eyes for probably 45 minutes, raising my hand. She called on my raised hand. I asked:

“The House of Representatives impeached William Jefferson Clinton
on counts of perjury and obstruction of justice. He was held in contempt of a
federal court, was fined and disbarred from practicing law in Arkansas, and
resigned rather than be disbarred before the Supreme Court.

All of these were a consequence of his blatant lies under oath to a federal
grand jury.

Miss Clinton, your mother apologized, covered up, and lied for the lies that the
President told under oath. How then can the Hilllary campaign say the Monica Lewinsky
affair was just a personal matter, when candidate Clinton covered up perjury and committed obstruction of justice for the President of the United States?”

DRUDGE is now reporting this Breitbart coverage of the same incident.
Posted by Leslie at 10:04 PM No comments: