A Denver Public School is a good place to send your daughter to become sexually active. Now, the task force wants to make it more efficient, condoms to the boys, abortion pills to your daughter, get her ready for the next guy to use her. It's called godless education.

The term "Nuremberg Defense" was originally coined during the Nazi war crimes trials at Nuremberg after World War II. Nazi war criminals who were charged with genocide, mass murder, torture and other atrocities used the defense "I was only following orders" so frequently that the argument became known generically as "The Nuremberg Defense".
Posted by Leslie at 9:09 AM No comments:


"Neighbors Jim and Sarah Hopfenbeck, who were walking their dogs, passed
by the demonstrators.

"I just ignore them," Sarah Hopfenbeck added. "His job is what his job
is. If anything, this has galvanized neighbors in support (of
Meggison)." "

www.coloradorighttolife.org to hear it.
Posted by Leslie at 9:47 PM No comments:

During National Breast Cancer Awareness Month, it is fitting and proper that women be informed about any newly discovered dangers, even as the public groans under the weight of all the warnings surrounding the mere act of living.

For example, a well-researched Chicago Tribune story last week disclosed that women who have just a couple of alcoholic drinks daily increase their breast cancer risk by 13 percent. Coincidentally, a new study reported that abortion is an important breast cancer risk factor, yet I couldn't find a word describing the research in mainstream media.

How to explain this disparity? I'll be vigorously advised that "most" studies disprove an abortion-breast cancer link. Or that the study in question appeared in a "conservative" scientific journal. Or that the study is bogus or unimportant. Or, more rudely, that the whole breast cancer argument has been concocted by anti-abortion rights advocates to make women afraid to have abortions. The issue is dead, I'll be notified. Kaput. Here I would remind critics that in science it's not who says it or how many say it that counts. What does count are the data and the rigor with which they are collected, analyzed and held up to a scientifically credible hypothesis.

So let's look at the science of this latest study, which appeared in the Journal of American Physicians and Surgeons. Using statistical techniques and reliable national health data, the study of eight European countries found, to a statistically significant degree, that the incidence of breast cancer increases with the incidence of earlier abortions. The researcher, Patrick Carroll, used the same mathematical model employed in a 1997 study that predicted with extraordinary accuracy breast cancer increases in England and Wales from 1998 to 2004. Using that model, Carroll predicts that countries with higher abortion rates -- England and Wales -- could expect a troubling increase in breast cancer rates.

The Irish Republic and Northern Ireland, where abortion rates are lower, should experience a smaller increase. And in Denmark and Finland, where abortion rates have declined, cancer rates should similarly decline. Some will object because the study is "only" epidemiological -- meaning that it relies on a statistically significant relationship between the incidence of breast cancer and abortion to infer that one causes the other. The standard, but simple-minded, objection to epidemiological studies is that a correlation does not necessarily prove causation. That's true, to some extent. But, epidemiologists use correlations in more complex ways, combining them with a range of medical, sociological, psychological and other information to lead their research in the right direction, to support or debunk hypotheses, and toward solutions for significant public health
problems.

In the study of the abortion-breast cancer link, the working hypothesis is simple: For a woman who has not had a child before, an induced abortion is more likely to cause cancer because it interrupts the hormonal development of breast cells for later lactation, thus leaving the cells more vulnerable to uncontrolled and abnormal division, i.e. cancer.

The problem with dismissing the Carroll study because it is epidemiological is that you'll also have to dismiss a multitude of public health studies, including ones claiming a link between radon and lung cancer. These are the same epidemiological studies that alarmed millions of Americans, frightening them into buying radon detectors and creating a huge radon mitigation business. No study is perfect, and Carroll's shortcoming is that his data do not allow comparisons of individual women over time. But other major studies have, and according to one unchallenged compressive analysis of those studies, they show that a pregnant woman who has never had a child before and aborts in the first term increased her chance of breast cancer by 50 percent.

Science, by its nature, exists in an unsettled state. Evidence piles up on many sides. The public becomes unsettled. The media, as is their wont, avoid the complexities, especially when the complexities challenge preconceived or prevalent political notions. Instead of coming to grip with such concepts as epidemiology, they escape into silence. And ill-serve the public.

Speaking of media credibility, or lack of it, the conservative blogosphere is buzzing with the mainstream media's failure to report retired Lt. Gen. Ricardo Sanchez' scathing criticism of the press in a recent speech. Yet, the media gave wide coverage when, in the same speech, he criticized America's conduct of the war. His criticism of the media would have resonated with millions who question the media's integrity and balance. Having been in this business for almost 40 years, I'm ashamed of and unable to understand my profession's utter dereliction when it comes to reporting its own failures.

http://dennisbyrne.blogspot.com
Posted by Leslie at 2:28 PM No comments: 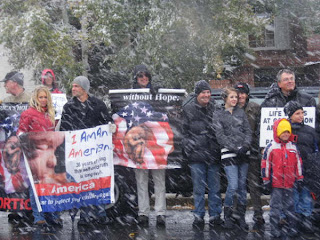 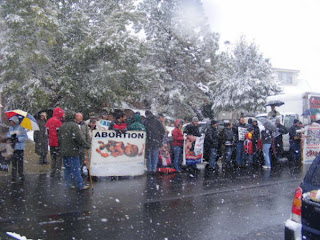 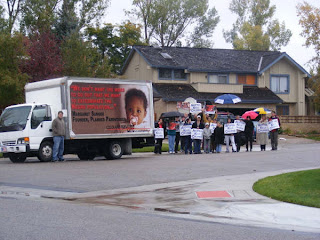 NO PEACE NOR TRANQUILITY
WHILST BUILDING "BABY DEATH
CAMPS!"

Please email the Vice-president of the Weitz Co, Don Gendall. (We will be prayerfully protesting his home!) Let Don Gendall know the seriousness of taking on such a project, and that we really don't want to come to his home, but that we won't let him build a death camp in tranquility.

Weitz' slogan is "Build in Good Company." Planned Parenthood is not good company, but a bloody company. Further, their homepage, Weitz.com, says things like, "honesty and integrity" and "respect for people" and "nurturing personal growth." Feel free to include references to these in your email. Unborn babies are people too!
Posted by Leslie at 9:56 AM No comments:

Your editorial praising a Denver Human Services
investigation of the death of Chandler Grafner falls
on deaf ears after the Post gave a plethora of reasons
and justifications for starving little Dylan to death.

You set the standard and gave other parents the idea
that when the going gets rough, ending innocent life
is permissible.

Shame on you for pretending otherwise. 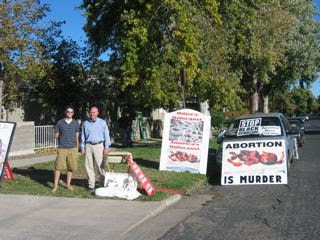 Abortion foe and construction industry executive, Chris Danze,
joined Keep Peace in Stapleton president, Will Duffy in front of
Planned Parenthood's 29th and Vine abortion mill, Saturday,
October 6, 2007 to participate in the regular pro-life rescue efforts
and discuss the proposed replacement for the first and oldest
abortuary in the nation.

Mr. Danze granted an interview to Westword Magazine, Denver's
alternative newspaper and later in the day met with pro-life
activists at Colorado Right to Life to share tactics. PP opponents
learned how he took his deep seated faith and convictions and brought
about a tremendously effective boycott. Chris founded Texas Contractors
for Life and rallied area contractors to effectively boycott the building of
Planned Parenthood's killing mill in Austin.

According to a 2003 CNN report, "Danze, a 48-year-old who has protested outside clinics,
compares the building of an abortion clinic to construction of a concentration camp during the Holocaust.

Browning Construction, one of the biggest contractors in Texas,
quit the project - stunning Planned Parenthood and forcing them to hire "mercenaries" to complete
the death camp.

Denver is looking to the Austin, Texas boycott and the Aurora, Illinois protests
(of PP's end run around the city of Aurora's Planning and Zoning board) to educate
the public about the evil of Planned Parenthood, their slaughter of the innocents for
profit and how one person can make a tremendous difference in fighting the Goliath
of our time.
Posted by Leslie at 8:47 PM No comments:

Colorado Right to Life is challenging the Susan G. Komen Breast Cancer
Foundation to stop touting breast cancer awareness, while keeping
women in the dark about the real causes of breast cancer. The latest
study reporting an abortion-breast cancer link published just
yesterday in the Journal of American Physicians and Surgeons is
entitled, "The Breast Cancer Epidemic." Among seven identified risk
factors, abortion was found to be the "best predictor of breast
cancer," with fertility listed as another useful predictor. (Carroll,
P. The breast cancer epidemic: modeling and forecasts based on
abortion and other risk factors." J Am Phys Surg Vol. 12, No. 3 (Fall
2007) 72-78. download the study at:
http://www.jpands.org/vol12no3/carroll.pdf).

This study by Patrick Carroll of PAPRI in London showed that countries
with higher abortion rates, such as England & Wales, expect a
substantial increase in breast cancer incidence. Where abortion rates
are low (i.e., Northern Ireland and the Irish Republic) a smaller
increase is expected. In countries that report a decline in abortion,
(i.e., Denmark and Finland) a decline in breast cancer is anticipated.

Ms. Silver was appalled at the stunning lack of information the Komen
representatives had about basic breast physiology. When challenged about their refusal to stop
giving funds to America's largest abortion provider and to inform women that abortion of a first
pregnancy greatly increases exposure to future risk of breast cancer, the Komen officials made
this ridiculous assertion:

"We aren't so much about the prevention, we are all about the cure,"
noted Brandorff.

Raising the hopes of desperate women and their families while refusing
to acknowledge the a-bc link, (www.abortionbreastcancer.com) is
dishonest. Beyond that irresponsible approach to treating women as if
they can't handle the truth, the whole Race for the Cure premise is
steeped in fraud.

"Even the tobacco industry wouldn't have had the nerve to try to
defraud smokers about the risk of using their products with the same audacity," said CRTL V.P., Leslie Hanks.

"Komen perpetuates breast cancer by giving funds to Planned
Parenthood. They claim the funds are for breast screening but we know
that breast screening is down 15% at Planned Parenthood and abortions are
up 23%."

"Colorado women deserve the truth that abortion of a first pregnancy
is linked with a doubling of the risk of future breast cancer. Raising millions to cure a
disease that is largely avoidable is despicable," said Hanks.
Posted by Leslie at 8:19 AM No comments: