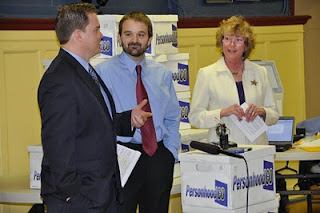 Ok, it really irks me to give RHReality Check's Wendy Norris credit for anything, but I have to thank her for giving my first attempt at stand up comedy a plug!

And she didn't even make note that I kind of mangled the punch line!

Her report and Tweets from our Personhood CO petition turn in and rally spread the word about our amazing feat (imo) of turning in nearly 80,000 signatures Friday to the Secretary of State. She gave my opening line a bit of note:

"I hope nobody minds but I did bring my crib notes with me today," Hanks said as she flashed her palm at the supporters. "In case you can't see this it says 23 + 23 = 46. One precious new human being made in God's image. That's embryology 101 for those egg-as-a-person supporters who might be in the audience."

but sadly went on to outright lie about me. What up, Wendy?

"While Mason tried to strike an upbeat note for the group's first 2010 state ballot test, the gathering took on a decidedly strange and nastier tone after he introduced Colorado ballot co-sponsors, Gualberto Garcia Jones and Leslie Hanks. During their turns at the stacked box podium, each took verbal swipes at Planned Parenthood of the Rocky Mountains communications director Monica McCafferty, who quietly watched the event from the back of the room, RH Reality Check and this reporter."

I never said a single word about the rather stunning red-head, Monica.

Of course, PP has a history of using attractive, black sophisticated people, as well, to sell their deadly wares. 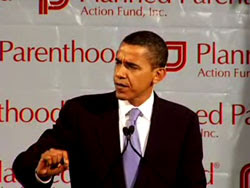 If one reads the article, the so-called "verbal swipe" is never mentioned after the claim is made.

Journalistic sloppiness or malpractice, you decide?