"DeGette certainly doesn't speak for all women, or unborn women," 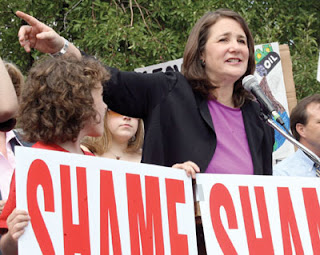 "To put herself out there as a huge advocate for women, DeGette certainly doesn't speak for all women, or unborn women," said Leslie Hanks, vice president of Colorado Right to Life. "She's been a mouthpiece for the abortion industry."


DENVER — Voters are used to black-and-white political posturing: Democrats want one thing, Republicans another, they tussle in Washington then go home to tell citizens how the opposition is flat-out wrong.
So it's a bit surprising that on health care, one member of Congress who argued with Speaker Nancy Pelosi and even the White House was ... Colorado's longest-serving Democrat?

Rep. Diana DeGette of Denver emerged in recent weeks as the House's most vocal defender of abortion rights. She was in late-night negotiations with Democratic leadership. She kept a worn piece of paper in her purse to keep track of votes. She kept a letter signed by 40 Democrats refusing to support an overhaul that restricted access to abortion.


Read more at the San Francisco Examiner:
Posted by Leslie at 7:16 AM No comments: