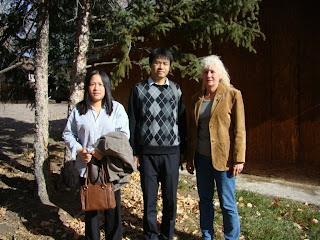 SHOULDN'T NEARLY 15 YEARS RESULT IN PROGRESS FOR HUMAN RIGHTS
AROUND THE GLOBE??

In the summer of 1994 The Golden Venture brought many women escaping the "One-Child" policy of communist China. The Clinton administration rejected requests for asylum for those escaping the draconian measures China takes including forced abortion, sterilization and harsh fines.

Fast forward to the story of Shiu Yon Zhou
who lingered for 5 years in an immigration facility until Christians went to bat for her and facilitated her release. Stealing 5 years from a woman for trying to escape her tyrannical government as they tried to kill her unborn child - how unjust!

Now another Chinese woman is facing deportation for her "crime" of exceeding her allotted 1 child her evil government allows. Xiu Mei Wei, is seeking prayers, mercy and kindness as she asks the Tenth Circuit Court for a review of her petition to avoid forced sterilization, should she be forced to return to China.

With the leniency we show to people south of the border, why are we so willing to send other immigrants with compliance issues back to certain persecution?

Prayers for a just resolution to Xiu's pressing dilemma!

Neither she, nor her 4 children should be forced to face a government willing to destroy her fertility, possibly incarcerate a mother of young children and oppress her family for criticizing their evil policies.

At the very least, will we ask our elected officials why such a brutal regime deserves Most Favored Nation status?
Posted by Leslie at 7:15 PM 1 comment: