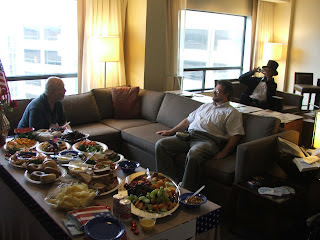 Arlington VA, July 8 – The fireworks continued. American Right To Life's hospitality suite atop the Crystal City Hyatt at National RTL's 36th annual convention [search for 'timeframe'] has demonstrated that the personhood wing of the pro-life movement is advancing, while the child-killing regulators are on the defensive.

Evidence was everywhere that the message from our hospitality suite last year spread widely among pro-life activists around the country. In 2007, our team had to work hard to demonstrate that the partial-birth abortion ban was a failure, in that, as James Dobson later admitted in writing, it "did not save a single human life." This year, a number of NRTL conventioneers enjoying our good food and drink volunteered to us that "the PBA ban didn't stop any abortions."

Disgruntled NRTL President: Unhappy with American RTL's leadership in helping to get personhood on the November 2008 ballot in Colorado and in widely exposing the failure of all abortion regulations, including the 15-year PBA effort, National RTL president Wanda Franz caused a scene by berating a great-grandmother who is a member of our hospitality team. At one of the NRTL exhibition booths, Connie Sharin had just purchased a bracelet, "I speak up for the unborn," and realized that someone was "standing guard" by her. Connie had been talking to an elderly gentleman and his wife, NRTL exhibitors, about the fabulous TV commercials at LifeCommercials.com, produced by ARTL vice president Steve Curtis. The one standing guard was Wanda and in front of onlookers, she angrily claimed that "American RTL is lying", but offered no example.

"If our group has made a mistake on the factual record of what has transpired in the pro-life industry," said Brian Rohrbough, president of American Right To Life, "of course we stand ready to correct ourselves and apologize. We ask Dr. Franz to indicate what she believes we've erred about. She is either correct, or she is wrong. We don't believe we're wrong in our serious charges of moral relativism and deceit lodged against those who regulate child killing. It does seem certain, however, that either Wanda or myself has misrepresented the truth."

Connie told Wanda that American RTL helped the Colorado for Equal Rights campaign in their historic accomplishment putting personhood on their statewide ballot, and despite disagreements, we and NRTL should be able to celebrate that together. Wanda disagreed, and claimed that it's the wrong time because we first need another judge on the Supreme Court. However, a hundred people coming up to our hospitality suite received a copy of our press release about our $10,000 Offer to Nat'l RTL to name a single pro-life justice on the U.S. Supreme Court. Just one.

Meanwhile our representatives who attended the convention sessions suggested that much of the bottom line message, including the talks on Health Care, was partisan politics. Most lobbying groups donate funds to political parties, but the Washington Post has reported a very rare reversal: that the Republican National Committee has donated $100,000 directly to Nat'l RTL and raised another $$650,000 for NRTL, calling into question the objectivity of the group which claims that, for example, that John McCain is against government funding of abortion whereas the U.S. Senate's official website indicates that the last time John McCain allocated funds to kill by surgical abortion unborn children was as recently as Oct. 27, 2005, targeting kids whose fathers are accused of being criminals, unborn lives McCain deems unworthy of love and protection.

National RTL welcomed infamous New York abortionist Bill Baird and his unrepentant wife to walk the convention floor (this mass murderer had, after all, paid his registration fee). Yet two conventioneers from Colorado, authors previously unknown to our team, came up to our suite and expressed their shock that while NRTL was hostile to American RTL, they personally witnessed NRTL being so very accommodating to this notorious abortionist. 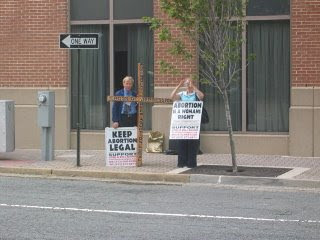 One NRTL conventioneer spent days riding a Greyhound bus across country to get to D.C., necessarily without stopping to shower. If you judge by first appearance, you might think this man, we'll call him Brian, was indigent and somewhat disorderly. We're thankful that Nat'l RTL sent Brian up to our suite: "Just look for the American Right To Life sign," he was told. One of our team, a nurse practitioner, said it appeared to her that he had a touch of autism and that this masked an extraordinary mind and memory. We welcomed this very hungry man and fed him the best meal he had eaten in days, and then talked with him. Brian brought to our attention extraordinary information that he realized would help us in our battle to promote personhood and end the era of the child-killing regulators. Brian said this information appeared on page 181 of a biographical book that we would never have read, and by the next day, he had obtained a copy of the book, presumably from a local bookstore, and we photocopied information that will appear in a press release ARTL will issue, Lord willing, in October. Thanks Brian!

Among the leaders American RTL spoke with were folks from three other countries in the Americas and Europe, one of whom was the chairman of his country's Right To Life group. Leaving him and his country unnamed for now, he spent a few hours with us during our second and third days, including watching our Focus on the Strategy II in our theater, and asked for a copy of our bylaws considering whether to urge his group to become an affiliate of American RTL. Praise God!

Another foreign pro-lifer spent a couple hours in our hospitality suite, over days one and two, and eventually invited American RTL to attend a strategy session in his country later this summer during which their major pro-life groups will assemble to discuss their ongoing efforts to end abortion. We will attend this vital meeting, finances permitting and Lord willing. Praise God!

ARTL spokesman Bob Enyart had a lengthy talk with a staff attorney employed by one of the largest pro-life litigation groups in the nation. The productive discussion explored the unintended moral consequences of Christians who wrongly think they are justified in negotiating with the right to life of children. Please pray for both Bob and this unnamed Christian attorney, that God will bring them both into deeper truth and service to our Lord.

Friends of American RTL invited the team to avoid the massive crowds at the National Mall and view the Fourth of July fireworks from a luxurious home on the banks of the Potomac. Great fun was had by all!

Some non-conventioneers came by. Two families from the D.C. suburbs came up to our suite, as did a local medical student, to find out about American RTL and watch our strategy DVD. One woman, the administrative assistant at a 300-member Bible church, asked for a copy of our Focus II DVD to show at her church. And all such visitors were thankful to learn so much about honoring God through the personhood strategy to protect the innocent!

And finally, while National RTL complained to the Hyatt Hotel in an attempt to pull the plug on ARTL, we hosted more than 100 conventioneers, had important talks with dozens of others, and opportunity to share the Gospel of Jesus Christ with some unbelievers, all in a few days of outreach. National's complaints against us led to the police being called in, and ARTL officials turned the meetings with hotel directors, security and police, into peaceful and respectful times of blessing, and when the police came back to the hotel in hopes of getting pro-life information to share with others, they bypassed the NRTL convention and came to American RTL. We thank God for blessings, great and small!

This report is for Friday and Saturday, July 4-5, days two and three of our three-day Meeting Hostility with Hospitality project. And check out this two-minute video we made for fun with Pro-Life News TV at the Lincoln Memorial with our very own anti-abortion Lincoln lookalike as we were leaving town!

p.s. PBA Update: Almost no one we talked to seemed to doubt that the Partial Birth Abortion Ban accomplished nothing but waste time and money. Most on our team encountered not a single person who disagreed, like they certainly would have a year ago. Even one lady who came up to defend NRTL corrected her own son when he seemed to think the PBA ban actually outlawed partial-birth abortion. She turned to him and explained that it only changed the procedure a little, a four-inch variation from the neck to the navel. If even our angriest enemies (and she was angry!) now admit the futility of NRTL's primary objective over 15 years, then the Personhood movement is really picking up steam!