Alice in Wonderland & the Mad Hatter in Denver 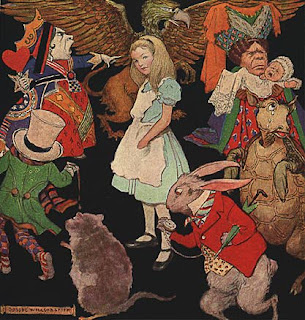 
April 2, 2010 I, Jo Scott, was charged with that harassment, including assault, participating in illegal activities outside a health care facility and following a person in or about a public place and not one police agency contacted me for 42 days of the investigation. When Investigator Chavez contacted me, he informed me that the Denver Police department had alerted me to the investigation. I told him that I had had no contact with the police about the incident and he didn’t believe me, thus began my trip down into “Alice’s infamous rabbit hole”. I told Investigator Chavez that I had no recollection of the woman charging me with the crimes against her because the incident took place over a month before and allegations were false. I knew that I NEVER assaulted anyone. Chavez said that he had viewed a Planned Parenthood video recording of the incident and he saw me assault the victim Laura Brown and that there was an eye witness to assault.

Corporal Scudder of the Denver police department was summoned to mill to view the video and he also saw me assault Ms. Brown. The eye witness Catherine Alderman, vice president of Planned Parenthood public affairs, just happened to be driving by at the exact moment that I “assaulted” Ms. Brown and witnessed the whole thing. If you watch the video as the car drives by, my hands are in my pockets but that did not stop Alderman from lying under oath.

Under oath both Scudder and Alderman acted out a two handed assault and the actions that Ms. Brown had to take in order to free herself from my grip. Nothing is as it seems in “Alice’s Wonderland”.

One insane thing after another happened during the trial. Laura Brown wrote in her initial police report that she was afraid to drive by us so she parked a block and a half away and walked by us. Then a week before the trial she submitted a second statement recounting that she parked a block and a half away because she didn’t know that there was a parking lot at Planned Parenthood. Yet, during the trial, under oath, she testified that she had been there three times before.

The judge that presided over my case is on record for contributing to several abortion mills in Colorado and she is a member of that the “Association of Women Judges” that publicly opposed the Personhood Amendment 62 in Colorado while I worked to get it passed. She refused to rescues herself saying that she would be able to be fair. When my lawyer, Terry O’Malley, presented motions loaded with first amendment case law undermining the Colorado laws that they were using to quash my free speech rights Judge Claudia Jordan denied each motion without thought or legal reason why. Then, shockingly, she asked the DA to write up something as to why she ruled the way she did.


In his opening statement the DA said that I had cussed at Laura and called her a whore while assaulting her. It was difficult to listen to a DA accuse me of doing things that I
detest.

Laura brown wrote in her initial statement to the police that I repeatedly verbally and physically assaulted her. But on the stand she said that my demeanor was calm and worried for her. She admitted that I never called her names or cussed at her. She said, that I said, that she would be participating with murders if she went into Planned Parenthood. That is all that she would say against me. Although she did not testify to it and I do not remember her, I know that I would have offered her free help if she was willing to go somewhere else because that is something that I always offer to women walking into Planned Parenthood.

The Mad Hatter times six sat on my jury. Our culture makes the Alice’s Wonderland look almost normal. The world is a crazy place to be unless you understand that the world hates God and is more than willing to destroy the innocent image of God because of their hate. A woman in Jackson Hole Wyoming recently told me that she had one abortion and nothing that I could do would prevent her from having another. Unfortunately, if she doesn’t repent and come to know the saving grace of Jesus she’ll get to tell her children at the judgment seat why she killed them. Sidewalk counselors have chosen to love the unlovely and embrace the mad hatters of the world because Jesus loves them and he can use us to reach them. He loved us when we were unlovely. Not a one of us deserves what He has done for us.

In spite of the evidence the jury found me guilty of the intent to harass, annoy or alarm another person, repeatedly insulted, taunted, challenged or made communications in offensively coarse language to another in a manner likely to provoke a violent or disorderly response, participating in illegal activities outside a healthcare facility and following a person in or about a public place. I was not found guilty of the assault charge because the video vindicated me. On June 2, 2011 I was sentenced to 180 days in jail suspended, 90 days in jail, 2 years probation, 100 hours community service and about $1,700 in court fees and fines.

As I entered the court house for sentencing, I was approached by a federal marshal and served with a federal FACE civil lawsuit for Ken and I for $35,000.

It looks like things are going to get a little tougher on the sidewalk for a while. Ephes. 6:12 says, “For we wrestle not against flesh and blood, but against principalities, against powers, against the rulers of the darkness of this world, against spiritual wickedness in high places.” As long as we remember to love the Judge Claudia Jordans and Laura Browns of the world we will stay on focus and hopefully pull some out of the fire along the way. Then Jesus will get the glory!! Please pray for Ken and I as we have many very important decision to make as we move down the “rabbit hole”.

To view the "assault" click here!
Posted by Leslie at 6:43 PM No comments: