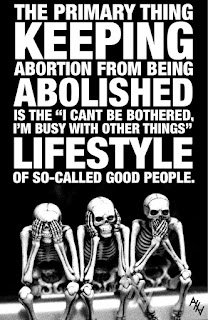 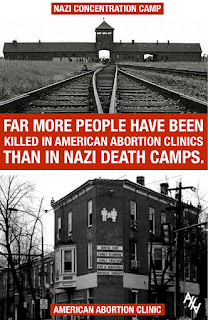 When It All Comes Down ~

One of my favorite BB King songs from back in the day is called "When It All Comes Down"
and I can't help but think of it today after reading a follow up on the ever more surreal irony
of the strange case of William B Costello's assault on Personhood petitioner, Everett Stadig.

Hmmmm? I honestly had wondered aloud, on more than one occasion, if the alleged perpetrator didn't have a connection to Denver's evil Planned Parenthood and whether that had something to do with the glacial pace with which the case seemed to be proceeding.

As it turns out, Mr. Costello travels around the state in the car of Colorado's "top political strategist" ~ a Democrat ~ and he was arrested in Bayfield just before the election, delivering campaign materials to a Durango campaign office.

The article explains, "Those who know Costello, 47, paint a picture of a successful real estate broker and dedicated father, someone trusted in the upper echelons of the community who gave no outward sign he could have committed such dark crimes."

Ok, this is pretty fascinating and so reading faster, I came upon this crazy coincidence, "It just makes you shake your head," Lamm said. "He was the kind of guy that mothers would be so pleased to see their daughters walk off with on a date. He was tied in with some very prominent Colorado names who mentored him. We are in shock around here." 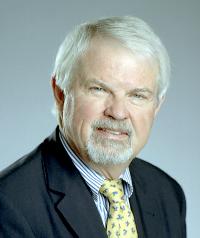 That would be former Colorado Governor Dick Lamm who earned the moniker, 'Duty to Die' Lamm for his pro-death agenda which began in 1967 as he carried America's first abortion on demand legislation, following shortly on the heels of Mississippi legalizing abortion for rape only in 1966. 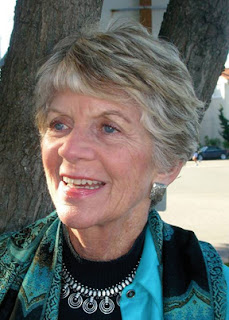 Over the course of the ensuing years, Dick Lamm's wife, Dottie, has written hundreds if not thousands of columns for the Denver Post, pushing their pro-death agenda.  So it is truly amazing that the Denver Post is revealing the truth in this sordid matter.

What could be a more bitter irony than a "prominent" Denver realtor, mentored by the family of America's legalized child killing industry architect, being charged with serial rape?

American Right to Life has been teaching for years that, "You don't kill a baby because her father is a criminal."  Yet, men who use and abuse women love abortion, for it allows them to continue their perverse behavior without detection.  And of course as Lila Rose and Mark Crutcher have demonstrated repeatedly, Planned Parenthood is more than happy to keep those dirty secrets in the closet.

In what will surely go down in history as a stunning turn of events, Denver media outlets yesterday reported that Everett Stadig's pro-life zeal has led to the arrest of a serial rapist.  In the, "you can't make this stuff up" category, Personhood advocates and abolitionists will today be pondering the timing of the movie Lincoln, Everett's uncanny likeness to America's great emancipator of Black Americans and his own advocacy for the babies under today's tyranny by the abortion industry. 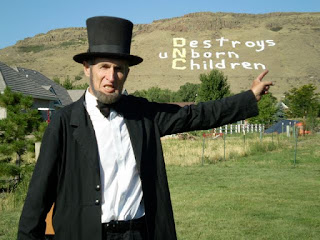 This past July, Everett was gathering signatures to help Colorado Right to Life and Personhood Colorado put our third citizen's initiative on the ballot to legally protect every baby in the womb, at every stage of development.  Denver grocery store chain, King Soopers in Stapleton, was Everett's regular location to ask shoppers if they'd sign his petition to help save the babies.  On June 30, 2012, William Costello became incensed by the question and threw Everett, age 69, to the ground, breaking his hip.

As Lifesitenews reported "“He was yelling ‘I’m pro-choice!’”  Stadig recalled, adding that he used “most foul language.” "Stadig explained that being ‘pro-choice’ meant pro-abortion, and again urged him to sign. At first the man walked away, but returned half a minute later, still swearing and yelling." 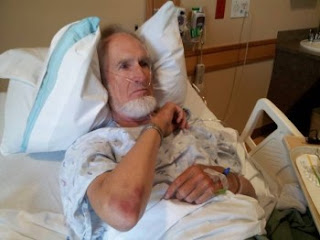 The wheels of justice grind slowly, as it's said. In Denver that certainly seems true when the individual involved is pro-life.  Because Denver Police have a consistent presence at Rocky Mountain Planned Parenthood, Everett has been concerned about the pace with which his assailant's case has been proceeding.  Twice he has gone to court, only to be told that the matter has been continued to a different date.  Attempts to get security video from the grocery chain were stymied. Requests for a victim's advocate to help with the matter brought forth no results. And so it seemed as if justice was predictably elusive for Denver's pro-life Abe Lincoln.

Yet, incredibly, last night news outlets broke the story that William Burton Costello, who allegedly broke Everett's hip, has also been charged as a serial rapist. The Denver Post reported, "A fight in a King Soopers parking lot in July has led to the arrest of a man who prosecutors believe is a violent sex offender responsible for three unsolved rapes in the Denver area, including an incident involving a 13-year-old girl." Incredibly, "Colorado law changed in 2010 with the enactment of Katie's Law, which allows authorities to collect DNA from people charged with felonies who have not yet been convicted."

Certainly more details will emerge in this blockbuster story of Denver's Abe, who his Pastor Bob Enyart describes thusly, "“Everett is so soft spoken, if he yelled you might hear him ten feet away. He’s a gentle giant who has the boldness of a lion when it comes to protecting an innocent child. Here in Denver, Everett is a local hero. As Jesus said, love God, and love your neighbor! That’s what Everett’s all about.”

Please pray that God's perfect justice will prevail in the upcoming trial and for restoration for the two women and the 13 year old girl, who appear to have been so tragically victimized by this angry individual.

"And we know that all things work together for good to them that love God, to them who are the called according to His purpose." Romans 8:28

Posted by Leslie at 6:25 AM No comments:

His Truth is Marching On

Last week Operation Save America saints gathered for the Mississippi States of Refuge event in Jackson to pressure the last free standing abortion mill to close.   Abolitionists from around the
nation shared shattered images of broken babies to a lost and dying culture in the south which
needs to recall their history of oppressing the black man, as they now oppress the babies in
the womb. 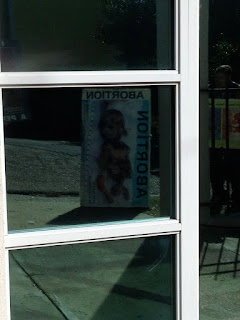 Suppressing truth was the mission of those remaining purveyors of death and destruction and
the institutions with a vested interest in keeping the status quo.

An early morning visit to Jackson's Robert Calloway HS provided a classic example which
got Coach Dave Daubenmire all fired up. The female security guards interfered with every student reached with an OSA brochure, explaining that babies in the womb are made in God's image and likeness, and are not "blobs of tissue." 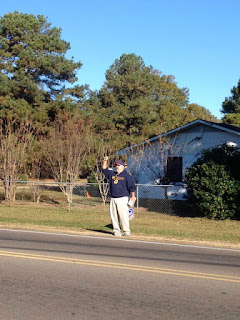 Coach Dave and the guards had a lively debate about why they were insisting the students
toss the informational brochures on the ground, trampling on our free speech rights, as well as those of their captive students. 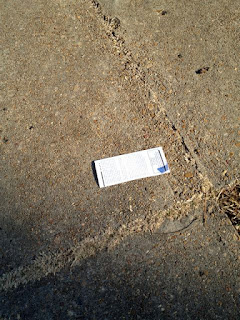 Rusty Thomas had the opportunity to explain to Jackson's Channel 16 before we finished our
educational outreach that the students must stop killing their children and if they are old enough
to visit abortion mills, they are surely old enough to learn that abortion destroys human lives 4,000
times every day. 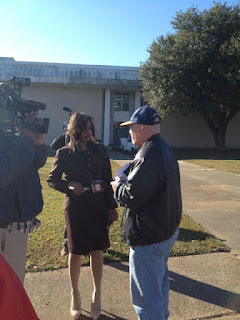 Back to the Jackson abortion mill, we were blessed by Miss Katie, playing sweet hymns at the gates of hell but we were stunned by the irony of this sign in on the entrance door. The only children allowed in facility are those awaiting death ~ Rescue those innocents being unjustly led to the slaughter Proverbs 24:11. 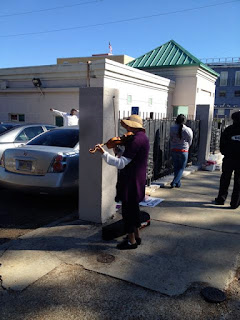 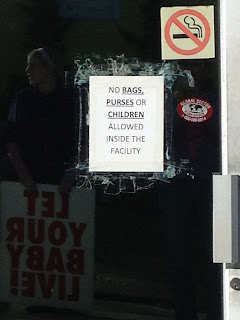 The "security" guy told me he's "proud to work at Jackson Women's Health Org." An OSA person prayed for him earlier in the morning, yet he told me I'm not to judge & turned on his Anti Truth siren, so he didn't have to hear my mild preaching. 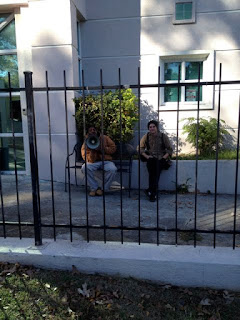 After strong preaching by Rev Flip Benham and Cal Zastrow at the Jackson Women's Health Organization (nothing healthy about dismemberment,) another team travelled to Jackson State ~ home of Walter Payton.  The Justice for All type display brought truth and light to college students, many of whom were receptive.  A muslim student, Corinthian, on the other hand, was incensed at the "offense" against "choice" and used all manner of crazy argumentation while vowing to shut out the display the following day. 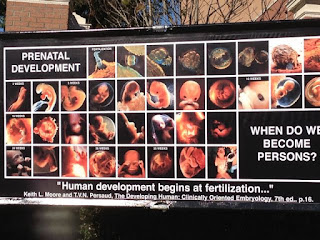 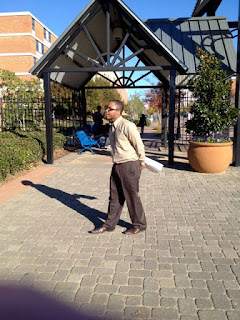 Despite the repeated efforts to obscure, obfuscate and obliterate the truth in Mississippi, His truth is marching on and Lord willing before the 40 year anniversary of Roe v Wade this January 22, 2013,
America will be free of the scourge of child killing in at least one state and the mighty killing Goliath will begin to fall . . .

Posted by Leslie at 1:23 PM No comments: