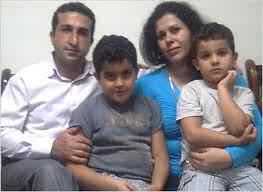 For going on six months the ACLJ has been working feverishly to raise awareness about the plight of a Christian Pastor ~ Yosef Nadarkhani and his family, who are being severely persecuted by Iran for his refusal to renounce his savior, Jesus Christ.

Yours truly wrote about this modern day Shadrach last October.

Since then the stakes have been raised and just a few days ago, the tyrannical leadership of Iran has determined the good Pastor will be executed for Apostasy.

Even though they will be violating international human rights protections, Iran is in high gear saber rattling mode currently and so international pressure needs to ratchet up several notches.

If you have yet to come to the aid of this dear brother in the Lord and his wife and two sons, now is the time!

Please call your congressman and plead for them to support Pastor Nadarkhani by co-sponsoring House Resolution
556 below:

H. RES. 556
Condemning the Government of Iran for its continued persecution, imprisonment, and sentencing of Youcef Nadarkhani on the charge of apostasy.

IN THE HOUSE OF REPRESENTATIVES

February 17, 2012
Mr. PITTS (for himself, Mr. FRANKS of Arizona, Mr. SHULER, Mr. WOLF, Mr. MCGOVERN, Mr. ELLISON, and Mr. CARTER) submitted the following resolution; which was referred to the Committee on Foreign Affairs

RESOLUTION
Condemning the Government of Iran for its continued persecution, imprisonment, and sentencing of Youcef Nadarkhani on the charge of apostasy.

Whereas the United Nations Universal Declaration of Human Rights and the International Covenant on Civil and Political Rights uphold that every individual shall have `the right to freedom of thought, conscience and religion', which includes the `freedom to change his religion or belief, and freedom, either alone or in community with others and in public or private, to manifest his religion or belief in teaching, practice, worship and observance';

Whereas Iran is a member of the United Nations and signatory to both the Universal Declaration of Human Rights and the International Covenant on Civil and Political Rights;

Whereas articles 23 through 27 of the Constitution of the Islamic Republic of Iran provide for freedom of expression, assembly, and association, as well as the freedom to practice one's religion;

Whereas Iran is a religiously diverse society and the United Nations Special Rapporteur on the situation of human rights in the Islamic Republic of Iran reports that religious minorities including Nematullahi Sufi Muslims, Sunnis, Baha'is, and Christians face human rights violations in Iran;

Whereas in recent years, there has been a significant increase in the number of incidents of Iranian authorities raiding religious services, detaining worshippers and religious leaders, and harassing and threatening minority religious members;

Whereas the United Nations Special Rapporteur on human rights reports that Iranian intelligence officials are known to threaten Christian converts with arrest and apostasy charges if they do not return to Islam;

Whereas in October 2009, Youcef Nadarkhani, a minority Christian, protested an Iranian law that would impose Islam on his Christian children;

Whereas in September 2010, an Iranian court accused Youcef Nadarkhani of abandoning the Islamic faith of his ancestors, and condemned him to death for apostasy;

Whereas the Iranian court sentenced Youcef Nadarkhani to death by hanging according to Article 167 of the Iranian Constitution, Article 8 from the book of Tahrir Alvasilah Fi Sofat Alghazi Va Maianaseb Lah, and Fatwas of Shia theologians;

Whereas, on December 5, 2010, Youcef Nadarkhani appealed his conviction and sentence to the Supreme Revolutionary Court in Qom, Iran, and the court held that if it could be proven that he was a practicing Muslim in adulthood, his death sentence should be carried out unless he recants his Christian faith and adopts Islam;

Whereas, on September 25, 2011, through September 28, 2011, the State Court of Gilan Section 11 held hearings to determine if Youcef Nadarkhani was a practicing Muslim in adulthood, and held that he had abandoned the faith of his ancestors and must be sentenced to death if he does not recant his faith;

Whereas on numerous occasions the judiciary of Iran offered to commute Youcef Nadarkhani's sentence if he would recant his faith;

Whereas numerous Government of Iran officials have attempted to coerce Youcef Nadarkhani to recant his Christian faith and accept Islam in exchange for his freedom;

Whereas upon the date of the passing of this resolution, Youcef Nadarkhani has refused to recant his faith;

Whereas the Government of Iran continues to indefinitely imprison Youcef Nadarkhani for choosing to practice Christianity; and

Whereas the United Nations Special Rapporteur on human rights reported that, at the time of his report, in 2011, Iran had secretly executed 146 people, and in 2010, Iran secretly executed more than 300 people:

Now, therefore, be it Resolved, That the House of Representatives--

(1) condemns the Government of Iran for its state-sponsored persecution of religious minorities in the Islamic Republic of Iran and its continued violation of the Universal Declaration of Human Rights and the International Covenant on Civil and Political Rights, and calls for the Government of Iran to exonerate and immediately release Youcef Nadarkhani and all other individuals held or charged on account of their religion;

(2) recognizes that freedom of religious belief and practice is a universal human right and a fundamental freedom of every individual, regardless of race, sex, country, creed, or nationality, and should never be arbitrarily abridged by any government; and

(3) recognizes that governments have a responsibility to protect the fundamental rights of their citizens and to pursue justice for all.

Never in my lifetime have I seen such courage from a Christian martyr. His refusal to renounce his Savior is not something
seen in America's seeker friendly churches.

May we all not only pray for this modern day hero's release but emulate his steely resolve ~ for Christian persecution isn't contained within any particular country's borders.

For the sakes of our children and grandchildren ~ PLEASE stand in solidarity with our brother in the Lord.

If you don't know how to contact your congress person click here.
Posted by Leslie at 7:40 AM No comments: