Am I Not a Brother ?


Last week at evil Planned Parenthood, a black, athletic young man stopped his jogging and approached me & Denver's Abe Lincoln look alike, Everett Stadig, in a bit of a mocking manner. When we told him about Margaret Sanger and targeting his race, he said he knew all that and if abortion wasn't an issue what would we be doing with our lives. I said fighting other human rights abuse which seemed to soften his brashness.

I needed to get up on the ladder to shout help to a woman going in and tell her we had anything she needed. I told her no innocent baby boy or girl deserved the death penalty and many of the other things I say to try to change hearts.

My new friend came up the ladder for a bit and watched the woman go in to likely kill her baby.

He told me he heard the pain in my voice for the woman and then we really had a descent conversation. He actually got quite choked up.

I wound up giving him my new card with my info on the back and the abolition symbol, "Am I not a man and a brother" on the front. He said he wants to get involved and lives in Seattle. I just saw the other day that there is an Abolish Human Abortion Seattle group launched. Please pray that he finds them and joins the fight against America's grave human rights abuse! 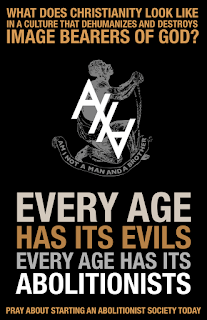 "We are driven by a desire to do justice, love mercy, and walk humbly with our God (Micah 6:8). We seek to bring justice to the fatherless and help to the helpless (Isaiah 1:16-17). We are attempting to “rescue those who are being taken away to death and hold back those who are stumbling to the slaughter” (Proverbs 24:11-12). Abolitionists are not interested in merely abstaining from evil themselves, but are committed to exposing evil and working against it (Ephesians 5:11)."