Great Great Granddaughter of Slaves Speaks out for Personhood 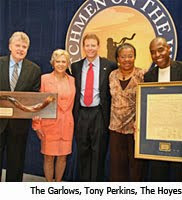 The Amendment 62 campaign in Colorado, seeking to legally protect every baby in the womb from the beginning of biological development, has been blessed by the presence of Lori Hoye and her husband Walter Hoye during the recent months of our campaign.

They have so very generously shared the personhood vision with churches all over Colorado from the perspective of the founders of the California Civil Rights Foundation and Issues4Life.

Lori's thoughts about the need to protect each life made in God's image, are particularly poignant as her family history
explains.

As the great great granddaughter of former slaves, I am ETERNALLY grateful that Abraham Lincoln DID risk the Union, fought the Civil War, and Abolished Slavery.

It is very easy to talk about practicality, pragmatism and polls when you are not the one wearing chains and being beaten on a daily basis. It’s easy to be patient when you are free. It’s another thing entirely when you’re the slave. The nearly 240
years that passed until the Thirteenth Amendment to the U. S. Constitution officially ended slavery in 1865 were an eternity for the slave. The past 37 years are an eternity for the preborn child.

In the black community every 72 seconds a preborn baby is being brutally murdered in the womb of his or her mother. The baby wants to live and expects those who have the power to save him or her to do it RIGHT NOW. Abortion has taken more lives in the African-American community in 37 years (over 14 million) than slavery took from Africa in more than 400 years (12 to 13 million African forbearers ripped from their homes and forcibly transported to the Americas in a massive slave trade
dating from the 1400s).