FOR SOME OF MY VERY FAVORITE
PEOPLE! 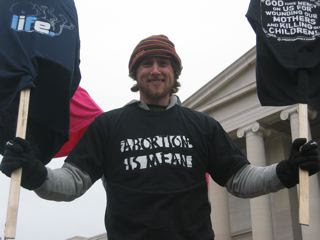 Posted by Leslie at 5:56 AM No comments: 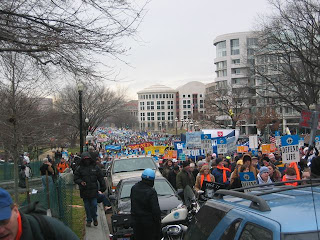 Posted by Leslie at 5:54 AM No comments:

WHAT AN HONOR - GLIMMERS OF HOPE!

I had the privilege of marching in the DC
gathering yesterday with the crowd which
stretched as far as the eye could see.

How very encouraging to have heard at the
Blog4Life event, hosted by Family Research
Council www.frc.org, that over 80% of the
crowd was under the age of 30.


Over 200,000 at pro-life march in Washington DC
The annual March for Life brought out thousands on the streets of the US capital. Young people increasingly represented.


Today tens of thousands of people committed to supporting the sanctity of human life rallied on the National Mall in Washington D.C. for the annual March for Life. The theme for this year’s march is “Build unity on the life principles throughout America – No exception! No compromise!”

In recent years, over 200,000 pro-lifers have congregated in the U.S. capital in protest of Roe v. Wade. Across the nation today, thousands of pro-lifers are gathering in their hometowns to oppose this decision that has claimed the lives of over 48.5 million babies.

This annual event continues to draw an increasing number of young people who have been born since the Supreme Court decision was handed down 35 years ago.

President of the Institute on Religion and Democracy, Jim Tonkowich commended the leadership of the youth:

“Changing the hearts and minds of the culture begins when the young decide to lead. In a country where the young are known for their lack of involvement in voting and political causes, the Pro-Life movement stands as a strong exception.

“It is amazing that the realities of abortion, which are so muddled with the older generation, are increasingly seen with a striking clarity by young men and women.”