Just ask the American College of Obstetrics and Gynecology
who in 1965 redefined pregnancy to be, "the implantation of
the fertilized ovum" in the womb. According to the great Baylyblog, article on morning after pills and Christian pharmacists, ACOG was simply manipulating facts to suit their ideological agenda - allowing for the IUD.

So, interestingly, although they were guilty of fudging on the definition of pregnancy, even they admit a "fertilized ovum" is the beginning of life. While the Denver Post persists in mocking the Colorado for Equal Rights Personhood Amendment as the "fertilized egg effort," it seems as though the experts recognize the truth. In fact, in a recent survey sent to 112 ACOG members, 70 of 96 (73%) said conception was a synonym for fertilization and only 23 of 96 (24%) said conception was a synonym for implantation in their own clinical practices. 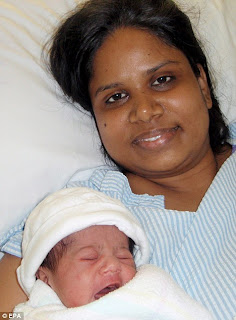 Miracle of mother who gave birth to baby girl after a nine-month ectopic pregnancy
By RICHARD SHEARS and NICOLA BODEN
Last updated at 12:18 AM on 01st June 2008

Doctors are calling her a 'miracle baby' - the little girl who was delivered alive and well after growing in her mother's ovary instead of the womb.

For nine months, Meera Thangarajah and her husband Ravi were completely unaware their baby was anything but normal.

It was only during the birth, at just before full term, that midwives realised they were dealing with a medical phenomenon.

Her parents have called the little girl 'Durga' meaning Goddess, because 'she is our little deity', a beaming Mr Thangarajah said today.

British experts say the chances of a baby being carried for so long in this way and both mother and child surviving unharmed are a million to one.

Million to one: Ravi Thangarajah cuddles her miracle baby daughter Durga who grew inside her ovary for almost nine months

ROMANS 1:22
"Professing themselves to be wise, they became fools"!

Bill Ritter
With today's signature on SB200, Colorado Gov. Bill Ritter, a Democrat, has eliminated gender-specific restrooms and locker rooms statewide, giving woman and girls reason to fear being confronted by predators, cross-dressers "or even a homosexual or heterosexual male," according to a critic.

The state's new "transgender nondiscrimination" bill makes it illegal to deny a person access to public accommodations, including restrooms and locker rooms, based on gender identity or the "perception" of gender identity.

Ritter signed the Expanded Discrimination Prohibitions, approved by the legislature, with this definition:

"Who would have believed that the Colorado state legislature and its governor would have made it fully legal for men to enter and use women’s restrooms and locker-room facilities without notice or explanation?" said James Dobson, founder of Focus on the Family, the Christian publishing and broadcast ministry in Colorado Springs.

"Henceforth, every woman and little girl will have to fear that a predator, bisexual, cross-dresser or even a homosexual or heterosexual male might walk in and relieve himself in their presence," Dobson said. "The legislation lists every conceivable type of organization to which this law applies, including restaurants, bathhouses, massage parlors, mortuaries, theaters and 'public facilities of any kind.' Those who would attempt to protect females from this intrusion are subject to a fine of up to $5,000 and up to one year behind bars.

"This is your government in action. It represents a payback to Tim Gill and two other billionaires who have essentially 'bought' state legislators with enormous campaign contributions. Coloradans deserve better!" Dobson said.

"And by the way, because of the way this bill is written, it is not subject to the initiative process. There is no recourse,” Dobson said.

According to the bill, business owners and managers of restaurants, gyms, barber shops, massage parlors and managers of public facilities "of any kind whether indoor or outdoor" cannot deny a person employment or access to a facility based on gender identity or that "perception."

The bill also makes it illegal to discriminate based on "sexual orientation" when renting, selling or leasing housing or when selecting members for jury duty." Penalties for those who discriminate against others based on gender identity include fines and/or time in jail.

The same issue, on which WND has reported, already has created a mess in Montgomery County, Md., where a lawsuit is pending seeking to deprive residents of the right to vote on whether they want their restrooms and locker rooms opened to men who believe they're women.

WND reported the Montgomery County Board of Elections certified a petition assembled by Maryland Citizens for a Responsible Government that would be placed on the November election ballot.

The petition seeks to reverse a county law adopted in recent months that aims to "protect" transgender people from discrimination in housing, employment, public accommodations and various services. Critics say instead it would virtually eliminate the ability of businesses, clubs or anyone providing a "public facility" to prevent men from entering women's showers, and vice versa.

The Colorado bill says churches, synagogues, mosqu and other places used principally for religious purposes are not included in the definition of "place of public accommodation."

"Lest we think that this is just the 'bathroom bill,' I'd like us also to realize that this really is about Christian businesspeople being able to practice their faith through their profession," Rep. Amy Stephens said, citing an Albuquerque photographer who refused to photograph a same sex couple's ceremony, was brought before the New Mexico Civil Rights Commission, found guilty and fined $6,000.

Dobson warned the Colorado bill now will be "coming to every state in the country."
Posted by Leslie at 12:46 AM No comments: