Shirking responsibility, Komen likes to focus on the cure! 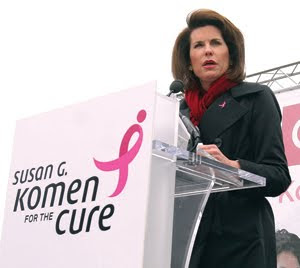 As transcribed from a recording of the meeting, CRTL asked, "Why aren't women being told about the most preventable risk factor?" to which Komen's Brandorff answered, "We tend to focus on the cure... we're focusing our energies on that, rather than the preventative."

The above quotes are from an October 2006, meeting that Colorado Right to Life, Eve Silver and Joel Brind, Ph.D ~ via phone ~
held with Denver's Susan G Komen leadership. We met just prior to their annual Race for the Cure event to which we have brought a truth truck message, "Breast cancer's most avoidable risk factor: Abortion," for the past 8 years.

We were discussing why Komen continues to give grants to Planned Parenthood in light of growing evidence about the
ABC link.

"In my previous column, I revealed that the son of the founder of the Susan G. Komen Breast Cancer Foundation is in a joint business venture with Planned Parenthood of the Great Northwest....

Eric Brinker wrote me that only "20 of Komen's 122 US affiliates fund breast health services through local Planned Parenthood clinics."

All 5 PPGNW clinics involved with Komen either commit or refer for abortions. All dispense birth-control pills and emergency contraceptives....

A 2009 study... showed that the risk for women under 40 of contracting a newly identified and virulent form of the disease called triple-negative breast cancer rose by 320% if using hormonal contraceptives for a year or more."

It is beyond time for the word to get out that the FOX is GUARDING the HENHOUSE!!

Would the tobacco industry have been given the same pass, were it to have given such lame excuses for its complicity in the horrific health woes their product induced?

Why are industries who prey on mis-informed women given carte blanch to exploit, and demean their intelligence with such drivel?

Wake up America! Wake up women! Come to grips with the reality that you've been duped!

Your health and happiness and that of your daughters' are on the line!!!!!

Become informed and protect your loved ones from the insidious dangers of OCs and abortion.
Posted by Leslie at 11:11 AM No comments: