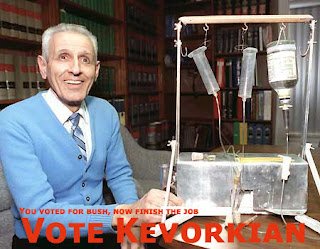 'We put animals out of their misery; we can do it for human beings'


A state district court judge ruled yesterday that patients have a right to doctor-assisted suicide.

Robert Baxter, 75, a retired truck driver from Billings who suffers from lymphocytic leukemia, filed the lawsuit along with four physicians in the state's district court system on Nov. 1, 2007. They were aided in the case by the assisted suicide advocacy group Compassion & Choices, formerly known as the Hemlock Society.

"It's always been a very important thing with me," says Baxter in Compassion & Choices Magazine. "I've just watched people suffer so badly when they died, and it goes on every day. You can just see it in their eyes: 'Why am I having to go through this terrible part of my life, when we do it for animals? We put them out of their misery.'

(Story continues below)
Posted by Leslie at 6:23 AM 1 comment: