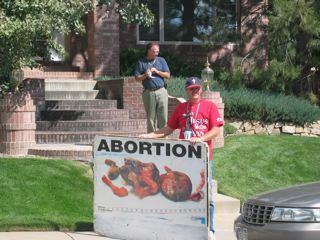 A GLORIOUS DAY FOR A PLANNED PARENTHOOD PROTEST!

One protester's 2 year old daughter strolled her dolly up and
down the sidewalks as the adults held 3 x 5 foot posters
of aborted babies. Planned Parenthood's 20th and Vine
security guard, Danny Cram, filmed the protest and was apparently
hired to protect the Weitz Construction Senior V.P.'s residence.

After a neighbor woman copied all the license numbers of
the opponents, 3 Lakewood police cars sped through the neighborhood
to respond to her complaint and give a stern warning to the protesters about their
limits.

Mrs. Meggison and her teenage daughter returned home to
see the signs and hear the pleas of pro-lifers to
have Gary abandon his plans to build the biggest
abortuary in the nation. Concerned citizens can contact the Senior V.P
of Weitz Construction at Phone: (303) 860-6600
Posted by Leslie at 8:50 PM No comments: