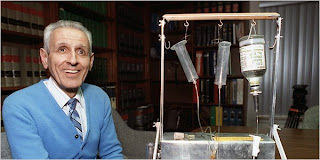 WorldNetDaily
State officials have offered a lung cancer patient the option of having the Oregon Health Plan, set up in 1994 to ration health care, pay for an assisted suicide but not for the chemotherapy prescribed by her physician.

The story appears to be a happy ending for Barbara Wagner, who has been notified by a drug manufacturer that it will provide the expensive medication, estimated to cost $4,000 a month, for the first year and then allow her to apply for further treatment, according to a report in the Eugene Register-Guard.

But the word from the state was coverage for palliative care, which would include the state's assisted suicide program, would be allowed but not coverage for the cancer treatment drugs.

"To say to someone, we'll pay for you to die, but not pay for you to live, it's cruel," Wagner told the newspaper. "I get angry. Who do they think they are?"

(Story continues below)
Posted by Leslie at 7:18 AM No comments: