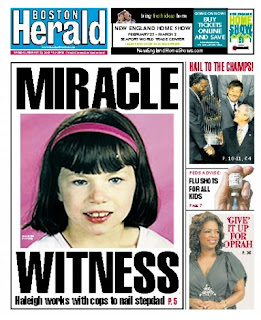 May justice prevail . . .
Never Before Seen Video of Haleigh Poutre

A never before seen video gives a rare glimpse at the life of Haleigh Poutre, more than three years after she was allegedly beaten into a coma.

Poutre Family Sees Haleigh for First Time in Two Years
The courtroom fell silent for nearly half an hour as jurors were shown the first video of Haleigh as she looks and acts today.

She wears a body brace and leg casts, can not sit up or stand on her own and cannot walk without support.

"She moves her legs and pushes a walker about 20 or 30 feet," says Dr. Jeffrey Forman of the Franciscan Children's Hospital. "Her best effort might have been 100 feet."

To communicate Haleigh uses a letter board to spell out what she wants to say, and though she can speak, doctors say her words are nearly incomprehensible.

"I think that's one of the shortcomings of the video, we're not able to hear what her voice is really like," says Forman. "It would have shown just how severely her voice is effected."

Haleigh's stepfather and alleged abuser, Jason Strickland, stared blankly as the video was shown. He is accused of pushing Haleigh down the stairs of their Westfield home in September of 2005. And though the video shows the lasting effect of severe brain trauma, the jury also viewed pictures of Haleigh when she was first brought to the hospital.

The photos show injuries already starting to heal, the most gruesome of which is a large burn in the center of Haleigh's chest. Prosecutors say a heat gun was held against her skin. Each cut, burn and bruise painted a disturbing picture of alleged abuse that ultimately denied Haleigh a chance at a normal life.

"She's unable to take care of her daily needs," says Forman. "She can't go to the bathroom by herself, she needs assistance for feeding."

Find this article at:
http://www.cbs3springfield.com/news/local/34704754.html