The wheels of justice grind slowly! 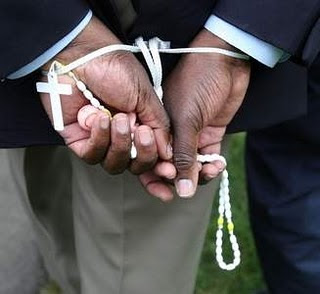 CHICAGO, May 5, 2011 (LifeSiteNews.com) - After nearly two years, the trespassing charges pressed against dozens of pro-life protesters at the University of Notre Dame graduation ceremony featuring pro-abortion U.S. President Barack Obama have been dropped.

On Thursday, Michael Dvorak, St. Joseph County, Indiana prosecutor, dismissed the criminal trespass charges that he has pressed against almost all of the pro-life protesters, known as the “ND88.”

I had the distinct honor of being at Notre Dame during the protests against Barak Obama speaking to the 2009 graduating class. Two images stand out in my mind emanating from that historic event where a Catholic university invited the nation's most pro-death president in a horrendous contrast with all the university should stand for.

Two of the 88 pro-life heros that were arrested made serious statements by their opposition and their vindication is especially sweet!

Dr. Alan Keyes traveled to South Bend with the intent of being arrested, "I will step foot on the Notre Dame campus to lift up the standard that protects the life of the innocent children of this and every generation. I will do it all day and every day from now until the Master comes if need be, though it mean I shall be housed every day in the prison house of lies and injustice that Obama, Jenkins and their minions now mean to construct for those who will never be still and silent in the face of their mockery of God and justice, their celebration of evil" 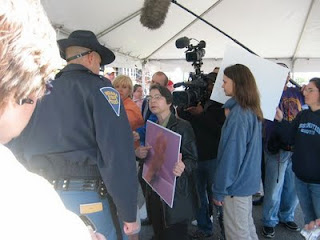 Very few Americans are willing to put it all on the line for the defense of the most innocent among us! Thank you, Dr. Keyes and
Dr. Miller for your inspiring actions ~ may we all take our responsibilities to be our brother's keeper as seriously! 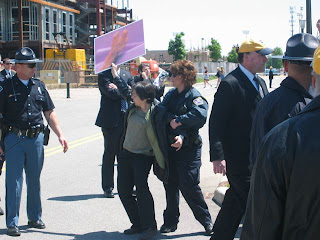 Posted by Leslie at 4:11 PM No comments: