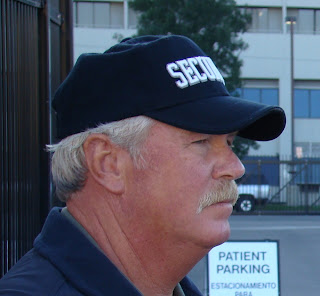 
I’m not certain how long Ron has been an “escort” for evil, Planned Parenthood in Denver. But, I can say this, he has gone out of his way to be unkind to those who try to rescue those being unjustly led to the slaughter.

Today, on my first venture to Colorado’s slaughterhouse, for some time, I was astonished to be approached by a Planned Parenthood death-scort.

Ron came across the street to speak to me today. As he approached, I recall wondering if he was coming to chastise me for some crazy regulation I was violating, or if he would yell at me for - what ever?

Nevertheless, Ron spoke to me in a completely different manner than ever before.

Ron Pringle spoke into my heart today, in a way that completely baffled my mind. He told me that he had heard about my twin grand daughter, Tuesday’s passing.

I couldn’t quite believe he was telling me these words.
In my choked up voice, I thanked him. But, I softly spoke these words.

He nodded his head, yes.

I can’t quite believe that he meant what he acknowledged.

Yet, I pray that the prayers of my friends and myself will bear fruit.
Posted by Leslie at 6:15 PM 1 comment: