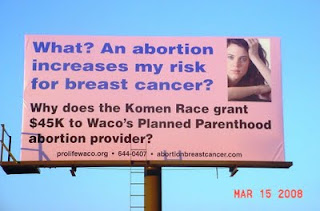 MEDIA ADVISORY, Sept. 8 /Christian Newswire/ -- A paper published this week in the journal, The Linacre Quarterly, by Angela Lanfranchi, MD shows how different pregnancy outcomes influence breast cancer risk. She explains, in simple terms, the biological reasons for each risk. [1] Citing 52 years of research, she said the evidence shows that:

"In utero, (the mother's) offspring produce hormones that mature 85 percent of the mother's breast tissue into cancer-resistant breast tissue." This accounts for the protective effect of full term pregnancy (FTP) that experts universally recognize.

Delayed first FTP is associated with a temporary risk increase because it lengthens the period during the reproductive years when nearly all of the breast lobules are immature and cancer-susceptible and exposed to the cancer-causing effects of estrogen during menstrual cycles. However, in terms of lifetime risk, the mother will eventually benefit from the protective effect of FTP, provided it lasted at least 32 weeks.

Short pregnancies that end before 32 weeks (except for first trimester miscarriages) leave the breasts only "partially matured" and "with more places for cancers to start."

"Induced abortion is a recognized cause of premature birth.... and prematurity more than doubles breast cancer risk if it is before 32 weeks."

Most first trimester miscarriages do not raise risk because "inadequate levels of the pregnancy hormones" during an abnormal pregnancy do not stimulate breast growth and "leave the mother's breasts unchanged."

Among women experiencing breast cancer during pregnancy, those who had FTPs had the longest survival rate in comparison to women who miscarried and had "slightly shorter survivals," and those who chose abortion and had the "shortest survivals."

"There is data that suggests that a woman who has a complete pregnancy and lactates within five years of an abortion has a lower risk of breast cancer than if a woman waits more than ten years before her first child is born."

Breastfeeding reduces risk "in proportion to the length of breastfeeding."
Experts concede that an independent link between abortion and breast cancer makes good biological sense. [2]

"We encourage the public to send Dr. Lanfranchi's paper to the American Cancer Society and Susan G. Komen for the Cure. Ask them if they can find any inaccuracies concerning the physiology presented in her paper. Challenge them to defend their position in the customary way - before their peers - by stating their objections in a letter to the editor of the medical journal."

Lanfranchi's paper is entitled, "Normal breast physiology: The reasons hormonal contraceptives and induced abortion increase breast cancer risk." She is available for interviews at 1-86-NO CANCER.

The Coalition on Abortion/Breast Cancer is an international women's organization founded to protect the health and save the lives of women by educating and providing information on abortion as a risk factor for breast cancer.