When a new human life begins! An expert speaks. 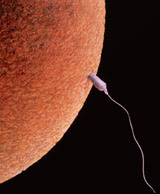 How quickly does this fusion between sperm and egg take place?

It’s a very rapid event. In less than a second, an entirely new human cell comes into existence. This new human cell (known as a zygote) has a unique molecular composition that’s distinct from either the sperm or the egg. And its behavior also differs radically from that of either sperm or egg.

Well, for example, the zygote’s first act is to change its composition so no other sperm can bind to its surface. This happens within the first 30 minutes following sperm-egg fusion.


So you’re saying this little single cell biologically acts as a coordinated whole “in its own interest,” so to speak?

I would say that even at the one-cell stage, the zygote is directing its own development. About five or six days later, at about the time of implantation, the embryo produces a hormone that can be detected in the mother’s blood or urine to tell her she’s pregnant.