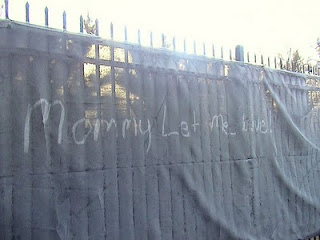 Saturday morning, January 8th was cold. It was so cold the black sheet that Planned Parenthood uses to cover its fence to prevent their clients from interacting with pro lifers frosted over. The frosted vinyl surface provides a fantastic medium for frozen messages, providing you are able to maintain warmth in at least one warm finger. When you use your finger to pen a message in the frost it melts and re-freezes, leaving what looks like a chalk message on the fence surrounding the killing place. 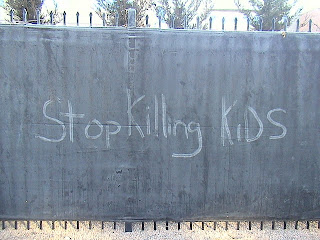 Two pro lifers, Debbie Evans and Jo Scott, spent about five minutes preparing the fence for the morning outreach to the moms in crisis. Ten minutes later, to everyone’s amazement, 8 squad cars surrounded the pro lifers and 2 others enter into the Planned Parenthood parking lot.

What followed will go down in history as a serious case of police buffoonery. The sergeant jumped out of his car and yelled, “Who wrote on the wall?” Jo Scott said, “I did.” To which he responded, “Come with me, I’ll need to see your ID you’re getting a ticket for destruction of private property.” Jo was flabbergasted and told the officer that she had written in the frost on the fence. He would not believe her. The police were on the scene for fifteen minutes when the sun came over the building and began melting the message.

Jo encouraged them to take pictures before the sign disappeared. The sergeant would not turn around to look at the fence. No amount of reasoning would get him to take his job seriously and look past his nose to the fence. Jo did her best to get business cards from every officer on the scene. She said that it would be fun to have them all in court explaining why they could not tell the difference between frost and chalk.

About a half hour into the Jo Scott inquisition her license was given back to her and Debbie Evans was pulled aside and ordered to provide her ID. By now all the pro lifers, about 20, were writing on the fence and asking to be arrested as frosted felons. It was truly hilarious!

The cops were citing pro lifers for writing in the frost and insisting that it was chalk. You couldn’t make up a better example of the buffoonery that pro lifers around the country deal with on a daily basis if you tried. Planned Parenthood says jump and the police says how high? They refuse to be confused by the facts.

Debbie was issued a ticket for destruction of public property. Jo was not because the security guard did not see her in the act of writing on the fence. By now, about forty five minutes after the troops arrived, the message on the fence had almost completely melted away.

The police parked in the middle of the street when they arrived. The blockade in front of Planned Parenthood and made it appear as though a major crime was in progress. During the time the police were blocking the street, no abortion clients entered the mill. Praise the LORD!!

All of a sudden, just as quickly as they arrived, the regiment of 10 departed. Five minutes after that, the officer that cited Debbie retuned to the mill and asked her for her ticket. “It was just frost on the fence; we’re going to tear the ticket up.” Debbie handed him the ticket and he tore it up.

Ten squad cars and the cops that go with them for one hour, I wonder what the frosty caper cost Denver?
Posted by Leslie at 8:16 AM No comments: