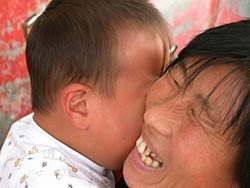 Harry Wu and Zhou
China- Why Most Favored Nation trading status, forced abortion and the Olympics?

This San Diego News Notes story from the 1990s reminds us of the horrific human rights abuses, which should make us question WHY our ties to China have no demands for basic human rights, before awarding MFN trade status or attending the 08 Olympics hosted by this brutal communist regime.

AFTER NEARLY FIVE YEARS OF INCARCERATION by the Immigration and Naturalization Service, Chinese refugee Zhou Shiu Yon has been released from Elmwood Detention Facility in Milpitas. Zhou was freed on May 28 after intervention by Chinese human rights activist Harry Wu. Two days before her release, Wu and a reporter from ABC's Nightline show had visited Shiu Yon in prison.

According to Tim Palmquist of the Bakersfield pro-life group Voice for Life, Zhou claims that when she became pregnant without official permission, five Chinese government agents broke down her door (the pregnancy having been reported by her doctor) and took her to a hospital. She was forced to take an unknown pill then locked in a room and told a worker would return in 30 minutes to give her a shot -- possibly RU-486, according to Palmquist. Her boyfriend bribed one of the hospital workers to allow Zhou to jump out of the third-story window. He picked her up and arranged for her to escape China on a smuggler's boat.

The boat was adrift for the last 28 days of its 90 days at sea before it was intercepted in Mexican waters off Ensenada on July 11, 1993 by the U.S. Coast Guard. Zhou, extremely ill, was airlifted to UCSD Medical Center in Hillcrest, where she was told by staff that "they must take the baby out" to save her life. Zhou believes the baby was alive when she got to San Diego; she is still unclear about whether San Diego doctors aborted her baby or removed an already dead baby.

Wu and Zhou testified June 10 before the House Subcommittee on International Operations and Human Rights (led by Rep. Chris Smith of New Jersey) about China's forced abortion and sterilization policy. Zhou told of women hiding throughout their pregnancies, nine-months-pregnant women being taken for forced abortions, and houses being burned down to punish people who violate the one-child policy.

Wu criticized the United Nations' granting of an award to China's population control program. "Americans must wake up to the cruelty and shame of a policy which makes brothers and sisters illegal," Wu told the subcommittee, "and the whitewashing of the UN on this issue must end."
Posted by Leslie at 7:34 PM No comments: