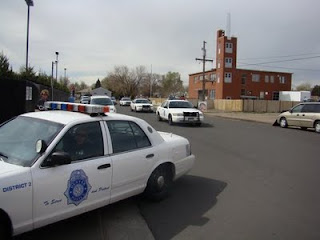 A Circus Erupts, Planned Parenthood Theatens to Arrest a Patron and A
Baby is Saved ~ Jo Scott ~ Prolife Colorado

No child killing with tranquility is an idiom that Denver pro life sidewalk counselors live by.

Increasing social tension at abortion mills is always a good thing. Usually it’s the pro life movement that calls attention to the perversion of Planned Parenthood. But that’s not so at the Denver Planned Parenthood abortion mill. It seems that the retired police officers that work as security guards during the hours that the abortionists are killing can’t resist calling the police.

The “Frosty Felon Caper” comes to mind. That is the day that was so cold that the tarp on the fence around Planned Parenthood frosted over. Sidewalk counselors wrote things like “Stop killing kids"and "Mommy I want to live” in the frost on the tarp.

Security guard and retired Denver retired police officer Dennis Anaya called the police to report the destruction of the tarp surrounding the killing grounds. That day 10 squad cars arrived on the scene and the circus began.

Fortunately, after an hour Frosty the snowman would not press charges, so the citation for destruction of private property that was issued by the district 2 police department was revoked less than thirty minutes after it was issued.

Today, Planned Parenthood security guard Ron Pringle unsuccessfully tried to confiscate the pro life information handed to a young man as he entered the mill parking lot. Pringle, a retired Denver police officer, told the young male patron that he would not be allowed in the building with pro life information in his pocket. The young man ignored Pringle and entered the building. Furious, security guard Pringle called the police on the Planned Parenthood client. Six squad cars immediately arrived on scene to arrest Planned Parenthood’s client for not allowing Pringle to confiscate his personal property and entering the building. (You just can’t make this stuff up!)

While the circus erupted outside the killing center two young women walked out of Planned Parenthood’s parking lot to ask for help. Laura was scheduled to have an abortion. She thought that she had no other choice but to abort her child because her husband is out of work and she has three other children. Sidewalk counselors were able to convince her that there is help available and she decided to keep her child. So while Mr. Pringle was busy trying to have one of Planned Parenthood’s patrons arrested, a baby was saved. Mr. Pringle in his relentless pursuit of perversion, missed his chance to intimidate the two women and force them into the mill to kill the child.

Instead, Laura and Maria, her friend, left the mill and went to the Riverside Baptist Crisis Pregnancy Center for help. Praise God!!!!!!

Planned Parenthood decided not to press charges on the young man with pro life literature in his pocket and he was released. So much for "Choice". 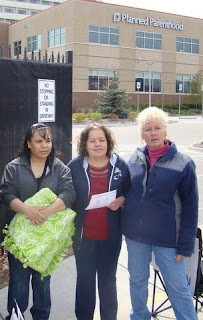 Posted by Leslie at 8:03 PM No comments: