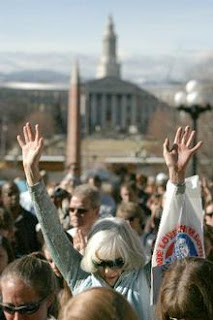 At Capitol, abortion likened to slavery


Photo by Barry Gutierrez / The Rocky

Mariette McGrath joins others in prayer Thursday on the west steps of the state Capitol, where 400 abortion foes turned out for the annual Colorado Right to Life rally.

Abortion is the slavery issue of our time, author Eric Metaxas told about 400 people at the annual Colorado Right to Life rally Thursday on the steps of the Capitol.

"God is the one who calls you to the battle," Metaxas said to the crowd, an eclectic mix that included families with baby strollers and protesters waving signs and abortion- photo posters.

They came to mourn the 36th anniversary of the Roe vs. Wade decision, which legalized abortion, and to be inspired to fight for the idea that the unborn are persons with an inalienable right to life.

Like slavery, the abortion fight may not end quickly, but it will be stopped - ultimately by educating one's opponents, not demonizing them, said Metaxas.

He wrote Amazing Grace, which explores how British abolitionist William Wilberforce - known as a "crazy fanatic" in his time - painstakingly overcame his 18th-century culture's entrenched acceptance of slavery.

Education was what got Shari Hutchings involved, said the 44-year-old mother of four, who took part in a march down the 16th Street Mall after the rally.

"In college we were never educated, we never learned the horror of abortion," Hutchings said. When two of her children were born prematurely, "I learned that babies were being aborted at the same age as my children - these precious babies. Now I have a passion about life," Hutchings said.
Posted by Leslie at 5:55 AM No comments: