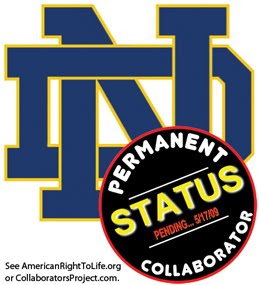 
A judge in Indiana has approved a request to depose a key school administrator by lawyers representing the "Notre Dame 88," pro-life activists who were arrested on orders from the Catholic university while they protested the school's speaking invitation to the devoutly pro-abortion President Barack Obama.

The move is key to the Notre Dame 88's defense, because when the famed university cracked down on the Obama critics, Notre Dame President John Jenkins issued a statement that all protesters were treated equally on campus.

However, William Kirk, former Notre Dame associate vice president for residential life who recently was dismissed, may have first-hand knowledge that the university previously allowed "gay" rights and anti-ROTC protesters to operate on campus without a permit and without any charges being filed, according to the Thomas More Society, which is working on the pro-life activists' defense.

The organization reports that Kirk had served the university for many years but "was abruptly let go after it became public that, while Notre Dame had arrested and vigorously prosecuted pro-life demonstrators, in prior years the university filed no charges against gay rights and anti-ROTC activists who also had protested on campus without permission."