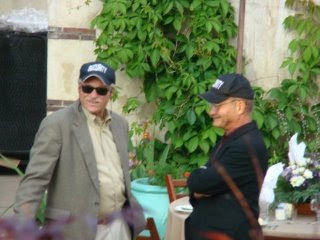 Stanley R. Roebuck was born June 17, 1949, in Oklahoma and died last week in a motorcycle accident in Denver. He was the head of security for Planned Parenthood of the Rocky Mountains. Stan, as he was known to the protesters at Planned Parenthood in Denver, worked diligently to insure that innocent baby boys and girls would die a horrific death at the hands of several Colorado abortionists. It is sad that although Stan went to the seminary he never accepted Jesus as his Savior.
On May 28, 2008 pro lifers protested a Planned Parenthood fundraising event at the Jaris Brinkerhoff estate. Because the entrance to the estate opened to the street, protesters were able to talk to all the attendees. Stan stood at the entrance to direct the cars onto the property. Stan was begged to accept Jesus as his personal Lord and Savior. He mocked as he listened to one gentle Christian after another present the Gospel of grace to him. He was unmoved.

The security guards at Planned Parenthood brag that they will repent at the last minute. Stanley R. Roebuck had no time to repent, no time for forgiveness. He is a tragic example of what can happen to those who mock God.
His obituary boasts that he recently devoted himself to defending women’s access to healthcare, but access to death camps would be more accurate. And in a last attempt to mock the protesters the obituary says that a large number of conservative protesters will miss him. We are Christians, something they could not bring themselves to say and we do not miss Stan. We use him as an example of someone whose life mocked our Creator. Stan mocked God with his life and in death his obituary defies God and continues to mock those who try to protect innocent children. It suggests that people donate to Planned Parenthood or Children’s Hospital. Even in death he makes no sense.
Posted by Leslie at 3:55 PM 2 comments: