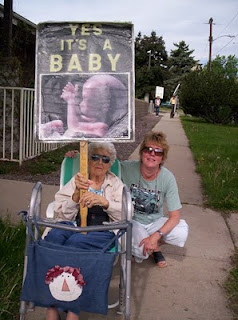 There are many saints in Colorado who stand in the gap for the unborn, but none as precious as Mary Henning. Mary was born in 1911; left home at 16, got an education, became a psychiatric nurse and married.

Mary became pregnant with her first child when she was forty years old.

But because she and her husband were struggling to make ends meet while caring for her aging mother-in-law they thought it would not be possible to care for an infant.

Mary went to her doctor and asked him to abort her child.

He refused to do the abortion.

So Mary had a little girl that she named Marie. Marie grew up in a loving home and eventually learned of the saving grace of Jesus and her name was added to the Lamb’s book of life. And when Mary was 62 years old Marie led her to the Lord.

Mary was no ordinary Christian. She hit the ground running. She was a willing servant in her church, a prayer warrior and faithfully protested against abortion at the Planned Parenthood in Denver. Mary openly told her story, always thanking God that she did not go through with the abortion because the daughter that she wanted to abort led her to Christ.

As Mary aged she needed a cane, then a walker to help her stand at the corner while holding her sign that said “You can still change your mind”. It was the first appeal seen by all the abortion bound mothers approaching the mill from the north.

Finally, Mary could no longer stand and needed assistance to reach her chair on the corner where she sat and resolutely held her sign.

After Mary’s 97th birthday it became too difficult for Mary to make it out to the picket line, so she prayed for babies to be saved and abortion to end.

Mary died March 2, 2010; she would have been 99 years old on the 17th of March. She ran the good race and today she’s with Jesus. Her testimony, dogged determination and love of Christ should inspire us all to follow in her footsteps…

See you in Glory Mary! 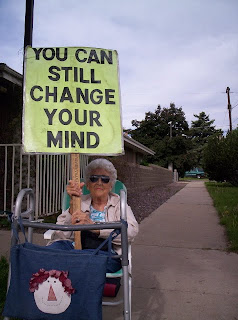 Posted by Leslie at 7:05 PM No comments:

If You, Twist And, Turn Away 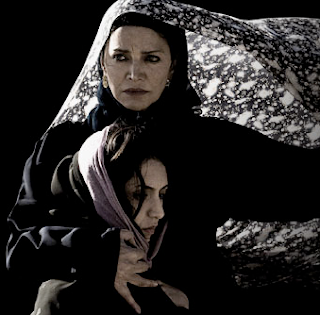 Shaking with fury, indignation, and sadness, I wept at the viewing of The Stoning of Soraya M, a movie that surprised me when I thought I could not be surprised.

The film is set in the Iran of the Ayatollahs, based on a true story, a million miles from the beaches of Los Angeles, where the Porches cruise and the plastic is visible at twenty paces in faces of awkward pixies. That's where I am now, reeling.

But where I expected Iran, and Mullahs, and sharia and injustice, I did not expect how utterly familiar this movie was. I expected foreign film; it starts with a French reporter, perfect. I thought to have never seen anything of the like, and to be outraged at the alien nature of the evil. I wasn't. I stared in familiar shock at intimate hoodlums. And I couldn't believe that I believe I'd seen it - sharp, slap, repetition. 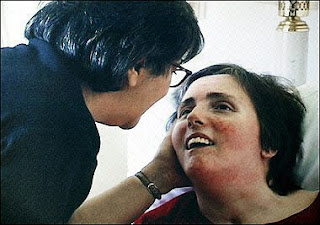 In the passion of Terri Schiavo I remember a husband, brute like an unthinking slug, a cretin. I remember he was an abuser of women, a piker, a sloth. I remember that Terri's x-rays showed her many broken bones - the times she'd buttoned up her blouse and pressed on.