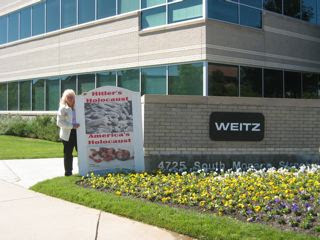 25 opponents of the Planned Parenthood mega killing center, scheduled to break ground
in North Denver this fall, brought 3 x 5 foot signs of aborted babies and a truth truck yesterday
to the headquarters of the contractor who plans to build the biggest abortuary in America.

The protesters included many young mothers and their toddlers as well as expectant
and nursing mothers.

In addition to the horrific photos of babies destroyed by abortion providers, one individual
carried a sign comparing victims of the holocaust with victims of the abortionist's knives.

Opponents of the proposed killing clinic vow to never curtail their efforts until
The Weitz Company declines to build a facility with the purpose of taking innocent lives.

The truth truck used in yesterday's protest was missing one of the banners
describing PP's founder, Margaret Sanger's racist roots. The banner
stating, "We don't want the word out that we want to exterminate the Negro population,"
was stolen by an individual at the Colorado Right to Life banquet September, 22, 2007.

The new location chosen by Planned Parenthood in north denver, is a predominantly
minority neighborhood which is typical of killing clinics in the U.S. 1,452 black babies
are killed in America daily at the hands of an abortionist. www.blackgenocide.org
Posted by Leslie at 1:27 PM No comments: