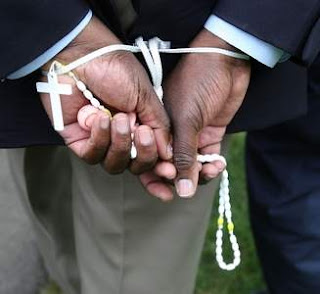 On Obama, blacks and Jews

The 20th century could well be called the century of Holocaust. I think it had something to do with the powerful assertion of godless self-sufficiency that characterized its most deadly and infamous ideologies. The communists, the fascists, the Nazis all have this in common: that they fancy themselves creators of new worlds of human possibility, willing servants of a fantasy in which the future, wrought by human hands, will advance beyond God's limited vision of human nature to birth before the universe the superman, the everlasting Reich, the workers' paradise, the endlessly perfected revolution of hope, change and unimpeded progress. Obtusely brushing aside the intrinsic contradiction between unlimited being and the objective possibilities of existence, these fantasies of human pridefulness have ended, all of them, in murderous nightmares. They expanded the possibilities of humanity all right, but only to the extent of adding hitherto unimagined horrors.

As they are part of a people who, on account of their very existence as a people, experienced the full brunt of this murderous pride, it has always seemed incongruous to me that so many Jewish poets (using that word in its broadest sense to include all manner of creative artists) and intellectuals seem at ease with the utopian delusions of the left. According to the biblical account, the will to assimilate our own destruction is one of the principles of our nature, one of the reasons we are as we are. Just as Eve reached for the deadly fruit, so we are inclined to surrender to the siren song of future godhood that distracts us from the voice and presence of God within. Because, in a sense beyond our rational understanding, we are already what we seek to become; the urge to realize our freedom in action makes it harder for us to accept our freedom in fact. Though time and again we experience, or inflict upon others, the mortal consequences of our vain ambition, we will not let go of it.

In this sense, sincere Christian belief admonishes the pride of every non-Jewish people, for whom it represents the truth that they are not the people chosen by God to be the earthly forbears of the Son of Man. But just as it challenges their pride, so it challenges the humility of the Jews. In their different ways both Jews and non-Jews are forced to confront the responsibility it implies. But inasmuch as it is easier to accept a recognized boundary than to constitute and accept it, the Jewish responsibility may be an obligation harder to understand or to forgive. Why did God choose them to epitomize the sacrifice He makes of Himself for the sake of our existence? Why would it be for them to bear the wounds He takes upon Himself so that all may be made whole?

In its true consequence for the heart, I imagine that the experience of the Holocaust would mean sensitivity so attuned to human suffering and injustice that every such infliction upon anyone, anywhere would resonate within and break your heart anew. My Christian understanding sees this as the experience of Christ upon the cross, and therefore as a possibility made manifest first and especially in Jewish flesh and blood. But if Christ's crucifixion represents a Jewish experience, so too does his agony in the Garden, his moment of longing for a fate other than sacrifice, in which acceptance of that fate coexists in the instant with the will to push it aside, and by that rejection make for himself another fate devoid of suffering and death.

As there are some Christians who linger in the moment of crucifixion, so I imagine there are Jews who live in the moment of doubt about God's will, when we are apt to be transfixed by our own vision of peace, happiness and hope. However that may be, there are certainly similarities between the temptations of that moment, and the seductive allure of utopian ideologies that brush aside God's intention for human life in pursuit of a godlike perfection of human will and freedom. America appears to be in the midst of such temptation now, as it stands preoccupied with a man whose words promise hope and a better world, but whose deeds echo the stolid disregard for innocent life that characterized the murderous ideologies of the 20th century. The incongruity of this moment appears especially in this: that he could not have achieved his goal without the support of rich and influential people from the very community indelibly scarred by the 20th century's inhuman ambitions. Lamentably, I believe that their reward for this support will be policies that usher in the destruction of Israel and greatly encourage and strengthen the deadly aims of those in the Islamic world whose lust for its destruction has led them to ingest and act upon some of the foulest ordure left by the Nazis' dysentery of hatred for the Jewish people.

(Column continues below)
Posted by Leslie at 10:00 AM No comments: