Islamic misogyny will be given the seal of approval by the American Academy of Pediatrics.

As a nearly 60 year old Grammy of 8 there are some things I'd just as soon not know about in life but when I do learn of EVIL perpetrated upon children ~ little girls, I JUST WANT TO SCREAM!!!!!!

Our nation is lost our way, our collective minds, our courage to stand up to evil, our founding principles!

Every day we read stories that confirm that our beloved liberty loving America, is being invaded with individuals who don't understand liberty and the rule of law ~ who want to bring their toxic laws and impose them upon us and we for some insane reason, take it.

And then we have our venerable institutions enabling the evil doers with out a whimper and even inventing convoluted excuses for helping them do their dirty work!!

This NYT story depresses me beyond belief.

The American Academy of Pediatrics has given their stamp of approval to disfiguring daughters.

As Atlas Shrugs' Pamela Geller, notes, "In what can only be construed as a complete loss of any semblance of goodness and morality in the name of multi-cultural poison, the most advanced civilization on the world is sanctioning......clitorectomies."

And, "They have issued a policy statement suggesting that doctors in the US perform this act of sick barbarity on girls to keep their families from sending them overseas for it. What next? Wife-beating seminars and its unintended benefits. Or a strip in Vegas for child marriages so they won't go overseas for the nuptuals."

Some of the article's accompanying photos indicate that the procedure is done in elementary schools ~ not sure if American taxpayers are footing the bill for this barbarism ~ yet!

I looked for an associated photo about "FGM" and trust me they can't be posted. Let the AAP know this is beyond insane!! And demand that they stop disfiguring children! 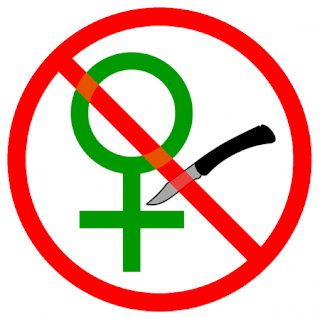