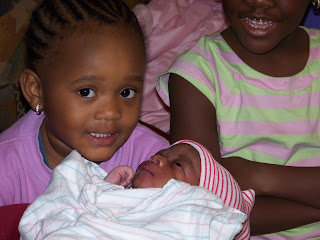 THE REAL MEANING OF CHRISTMAS
An African Tale

Some days sidewalk counseling can be tedious, other days it can be dangerous and in extremely hot or cold weather it can be physically taxing. But some days are just indescribably delicious. Wednesday was one of those days for this sidewalk counselor in Denver.

The day started out as usual, I was up and working at the computer before daylight, out the door by 8:00 A.M., and in front of Planned Parenthood abortion mill by 8:30 A. M. The young women walking into the mill were hard hearted and calloused. I wasn’t able to reach even one of them. My cell phone rang at 9:45 A.M.; it was Angie, calling from a nearby hospital to tell me that she was in labor. Several months ago I was able to talk her out of her abortion appointment at the Planned Parenthood abortuary. She needed emotional, Spiritual and financial help to continue her pregnancy and by the grace of God, we were able to provide it.

I was privileged to coach her through her labor and help her to usher little baby Thompson into the world. I can’t explain the overwhelming feelings of thanksgiving and humility that enveloped me when I looked into his precious little face and remembered back to the day that I confronted his mom with what she was about to do. I imagine that it is the same overwhelming experience that all sidewalk counselors have when they are so blessed as to hold the fruit of their ministry in their arms.
BUT, that is not all that happened on Wednesday. About four years ago a young woman from Liberia, Africa was scheduled for an abortion in September at the same Planned Parenthood death camp. Oretha and her one and a half year old son, Emanuel, had just arrived in the United States; she was afraid that she would be sent back to her war torn country by the United Nations if she were pregnant. When I met her she had no money and no food at home. To make matters worse her oldest son, Ephesian, was still in Africa somewhere, the war had separated them. She was frightened that she would never see him again unless she was able to work to raise the money to find him and bring him here. She was convinced that abortion was her only choice.
Fortunately, Oretha was a Christian, so when I talked to her about Jesus she listened. I reminded her that Jesus would not let her down, nor would we, the protesters and sidewalk counselors let her down. I promised her that we would stand with her and help her to find her oldest son, Ephesian. Oretha decided not to abort her child. 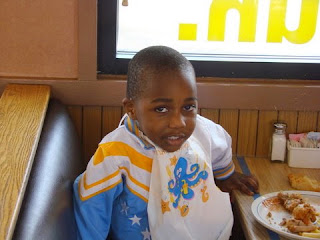 That evening, the phone rang, when I answered, Oretha was frantic, she cried, “You said that you would help me.” I was able to calm her down and convince her that we would help her and then she told me of her plight. The following day when I met with Oretha and I was able to provide her with the food that she needed and through God’s word inspire hope for the future. Although Ephesian was still in Africa, in time, Oretha began to believe that she would see him again. It has been about four years since the day that I met Oretha, who is now my beloved friend and sister in Christ.

On Wednesday evening, while little baby Thompson was being born, at long last, Ephesian landed at Denver International Airport. He walked off the plane and into his mother’s arms for the first time in over four years.

I met Ephesian the next morning, Thursday, December 13, 2007 at the United Nations office in Denver. I will never forget the look on Oretha’s face when I walked into that office. She had leaned on Jesus through the darkest of nights and now, sitting beside her was Ephesian her oldest son, holding his little brother Isaiah’s hand. (Emanuel was in school.) Oretha was radiant, her joy tangible and everyone in the room was caught up in the moment. 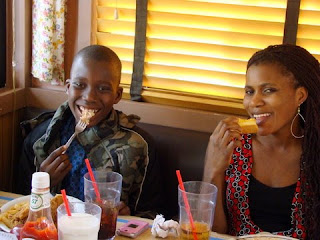 There is not enough time in this short story to recount everything that Oretha and her people endured in Africa before they were able to make their way to America and freedom. And yet she has remained sweet, thankful and brimming with joy. We all could learn from her. Americans have more wealth than most of the world, our children live better than King Solomon could even dream of living and yet we have very little faith. I thank God everyday that I met Oretha and her family. She has taught my husband Ken and I more than we could teach her in two lifetimes and all because we stood at the gates of hell proclaiming the love of Jesus.