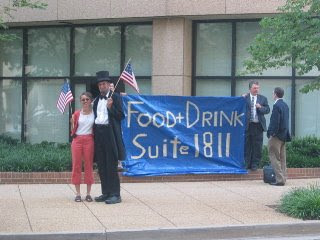 Arlington, VA, July 4 – The fireworks in Washington D.C. have not been relegated to the National Mall. American RTL is hosting another hospitality suite in a series of connected rooms at National RTL's annual convention on the top floor of the Crystal City Hyatt.

Scores of NRTL conventioneers are streaming into the ARTL suites to enjoy good food and drink, and to consider the moral argument for the personhood strategy toward ending "legalized" child killing. A NRTL conventioneer from Virginia told our hospitality team that Nellie Gray, main organizer of the D.C. March for Life, argues that a 'pro-life' law is a bad law if it ends with the words, "and then you can kill the baby." Praise the Lord for Nellie and the rapid spread of truth through the pro-life community!

The Hyatt told ARTL that we could place a poster advertisement for our hospitality suite on a tripod in their lobby inviting folks to our Regency Suite to celebrate the "personhood amendment on Colorado's November ballot!" Four things happened immediately after Hyatt personnel placed our poster in their lobby.

Our ARTL hospitality suite was on the same floor as the John McCain's, although ours was twice as large and far nicer with flowers, red white and blue decorations, much better food and drink, shrimp cocktails, literature, DVDs, darkened theater, media center, better seating, etc. However, after NRTL's complaint, the Hyatt officials maintained that even though ARTL is renting a significant section of the top floor of their hotel, and even though the Hyatt had posted our notice in their lobby, and even though they admitted that, "yes, we misrepresented that you could post your notice in our lobby," still, they would not restore our notice to its tripod.

Attorney James Odom, representing ARTL, told the hotel's general manager that since the Hyatt would not post our small poster board notice in the lobby as had been promised, we would hold signs in front of the hotel with enlarged versions of the poster, blown up to a huge 48-square feet. The hotel called in the Arlington Virginia police, and told ARTL officials that if they stood on the sidewalk in front of the hotel, they would be arrested.

Businesses and police officers often claim that protests in front of businesses are illegal, falsely claiming that public sidewalks are private property (rarely are sidewalks actually on private property). So, veteran street activist and ARTL spokesman Bob Enyart surveyed the scene and decided not to challenge the hotel's claim. Instead, the protesters organized across the street. The front of the Hyatt is all glass, hundreds of hotel rooms, glass elevators, enormous lobby windows spanning two floors, etc. By holding signs on the sidewalk directly in front of the hotel, only those entering and leaving the hotel would see them. Instead, by standing across the street, ARTL's massive protest signs were visible and readable to the entire hotel!

We had a team of ten people hosting our hospitality suite. Within a couple hours, it was evident to all that not only the NRTL conventioneers, but at least a couple thousand people were aware that our ARTL hospitality suite was on the 18th floor. And they started streaming in.

Pro-life leaders. NEA teachers. Activists. Pro-life attorneys. Convention exhibitors. NEA teachers. Pro-life teenagers. They just kept coming. We had lengthy talks with dozens of important people in the battle against abortion, from leaders in the anti-euthanasia movement, to reporters, to activists from Canada and Spain. One pro-life attorney from New Jersey, Howard, heard ARTL argue the case against regulating abortion and then when the call went out that we needed a second string to replace those holding the signs outside, he volunteered to pull a 90-minute shift and he held up on end of a massive sign while inviting those with NRTL badges to "go on up for free food and drink to Suite 1811." And a supportive chiropractor, not one to stand on a street corner and hold a protest sign, helped out by suggesting stretching techniques and even did some heavy lifting holding a side of one of the larger signs for a couple hours!

Peter Shinn of Pro-Life Unity took advantage of our "media center" and set up an ad hoc studio with lights, tripod and video camera and interviewed ARTL spokesmen. Later this evening, Peter phoned to tell ARTL that he was determined to work for a personhood effort in his state of Virginia. Praise God!

An Abraham Lincoln lookalike who has worked for years at Mt. Rushmore, Everett Stadig, traveled from Denver to D.C. to help ARTL host this hospitality suite in grand style! Abe was a major attraction out on the street, with many conventioneers, and tourists, asking to take pictures with him in his full regalia and stovepipe hat. Abe told everyone that we're "dedicated to the proposition that all men are created equal -- NO EXCEPTIONS!" And he'd say, "If you can't remember Suite 1811, just remember that I was born in 1809, and then go to the next door" :). And Abe did not discriminate between pro-lifers and others, for the National Education Association had their own simultaneous convention with hundreds of delegates staying at the very Hyatt hosting NRTL's convention. So, Abe invited the NEA delegates, known for being pro-abortion, to the American Right To Life hospitality suite! ARTL had set up a Lincoln Theater in their suite, equipped with a projector, and three PCs showing various DVDs: Focus on the Strategy, Romney Fairytale Ads, Forty Years in the Wilderness, and the Planned Parenthood racism YouTube video. When African American NEA teachers entered the suite, after they filled their plates with good food and sat around the living room, Leslie Hanks, longtime Denver pro-life leader, showed them the Planned Parenthood racism video to great effect!

Various regional pro-life leaders either came to our hospitality suite, or sent word wishing us well. We've been distributing the 600 copies of glossy and colorful ARTL literature and press releases we brought, as well as the 200 DVDs. Our ARTL team includes a former governor's speech writer, pastors, a flight attendant, a nurse practitioner, and other professionals, as well as ground support from Christians in the D.C. area. One of our team members, a great-grandmother, relaxed in the late evening in the hotel's hot tub, and spent a half out talking with the teenage kids of NRTL conventioneers who were surprised and fascinated to learn about Colorado's personhood amendment.

This report is for yesterday, Thursday, July 3, the first of our three-day project, Meeting Hostility with Hospitality. Despite undeniable signs of life, NRTL tried but failed to pull the plug on the ARTL event! Please pray that this project goes well and honors God! (Oh yeah, and also, that we don't get kicked out of the hotel :).