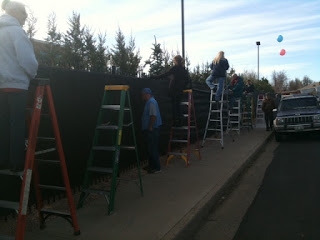 The most recent attempt by Planned Parenthood to stop pro-life sidewalk counselor Jo Scott from saving babies isn't just another in a long series of of attacks on Jo Scott. It is also a spurious assault on the First Amendment..

In an April 4 trial, Scott was accused of "hindering access" and "harassing" a woman who was attempting to enter a "healthcare facility." The complaining witness was going into the Denver Planned Parenthood during the time abortions are performed and Jo approached her to offer an alternative.

The trial took several strange turns as prosecuting attorneys attempted to convince the jury that Scott touched her accuser while trying to convince her not to enter Planned Parenthood. The attorneys then produced a video of the episode that clearly showed their claims were unfounded. Defense testimony by Leslie Hanks and Leo Mantei, both of whom were eyewitnesses to the incident, confirmed what was obvious on the video. They also refuted the complainant's claim that Jo Scott called her names.

To Jo Scott being lied about and falsely accused is nothing new. But in this trial, prosecuting attorneys did something never before attempted in a courtroom this side of Moscow. Since the claims they were making about Jo Scott touching or calling the complainant names were obviously untrue, they focussed their closing argument on the contention that calling abortion murder is a distasteful affront and likely to "provoke a response." And that, they claim violates a Denver statute.

If the case against Jo Scott sticks, anyone carrying a sign that says, "abortion kills children" or displaying a poster showing the results of abortion could be accused of conveying a message likely to "provoke a response." Consequently, presenting the truth about abortion would essentially become illegal since any communication about the subject might "provoke a response."

The abortion industry has long sought means to outlaw the efforts of anyone attempting to save babies -- to use the color of law to subdue their opposition. Of course, Jo Scott is their favorite target since, over the years, she has convinced at least 1000 mothers not to abort their babies. If the average fee for those abortions was $300, Jo has cost the abortion industry around $300,000. Small wonder she frequently finds herself falsely accused.

Has it occurred to the legislators who write such ridiculous laws that killing the unborn is distasteful and likely to provoke a response?

The jury will decide Jo's case April 5. Keep her in your prayers. While you're at it, keep our country in your prayers. God judges nations that sacrifice children. It provokes a response.
Posted by Leslie at 7:17 AM 2 comments: