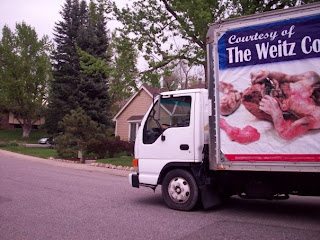 No child killing with tranquility!!

I missed this year's Mother's day Holiday Home Visit to a Denver abortionist O'Laughlin, but I'm so impressed at those who took time out of their day to remind the neighbors what he does, allowing him to live in that Mc Mansion and park a Mercedes in his drive way.

This activisim is starting to spread and I'm so proud of our friends in Indianapolis who are bringing the truth to abortionist's neighbors there. It is becoming an effective way to shine the light of day on these cockroaches and take abortion from the abstraction of being a "medical procedure" to showing the ugly reality.

And by the way, what could be more priceless than a 6 year old asking a local "law enforcement" official, why he won't arrest the killer?

Here's a word from her lovely Mother:

Here is a little clip of Kiralee's bold witness!

And to clarify the sound:

Kiralee: “Um, why do you not arrest, um, the baby killers?”

A brief hesitant pause then an unforgettable panicked look appeared on the policeman’s face as he glanced over at me with regret before stumbling over his response. (I was trying to be sneaky while recording on the DL so unfortunately his face is blocked – but trust me, you’ll just have to take my word for it – it was PRICELESS!)

Policeman: “Well… because they have their beliefs, and you guys have yours……….Some people think it’s okay, and some people don’t.”