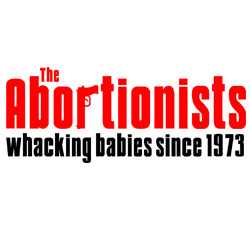 OBIT FOR ANOTHER DEATH PEDDLER!

Today the LA Times reports the death of one
who may have caused the deaths of untold
thousands/millions!!

Harvey Karman, invented a device in the 1970s that made abortions simpler, cheaper and less painful.

According to the Times, "He did more for 'safe abortion' around the world than practically any other person."
Posted by Leslie at 10:21 PM 1 comment: