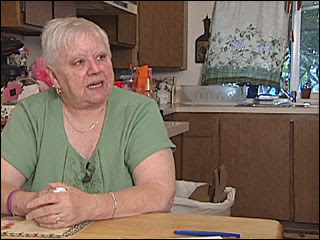 
SPRINGFIELD, Ore. - Barbara Wagner has one wish - for more time.

"I'm not ready, I'm not ready to die," the Springfield woman said. "I've got things I'd still like to do."

Her doctor offered hope in the new chemotherapy drug Tarceva, but the Oregon Health Plan sent her a letter telling her the cancer treatment was not approved.

Instead, the letter said, the plan would pay for comfort care, including "physician aid in dying," better known as assisted suicide.

"I told them, I said, 'Who do you guys think you are?' You know, to say that you'll pay for my dying, but you won't pay to help me possibly live longer?' " Wagner said.

Dr. Som Saha, chairman of the commission that sets policy for the Oregon Health Plan, said Wagner is making an "unfortunate interpretation" of the letter and that no one is telling her the health plan will only pay for her to die.

But one critic of assisted suicide calls the message disturbing nonetheless.

"People deserve relief of their suffering, not giving them an overdose," said Dr. William Toffler.

He said the state has a financial incentive to offer death instead of life: Chemotherapy drugs such as Tarceva cost $4,000 a month while drugs for assisted suicide cost less than $100.

Saha said state health officials do not consider whether it is cheaper for someone in the health plan to die than live. But he admitted they must consider the state's limited dollars when dealing with a case such as Wagner's.

"If we invest thousands and thousands of dollars in one person's days to weeks, we are taking away those dollars from someone," Saha said.

But the medical director at the cancer center where Wagner gets her care said some people may have incredible responses to treatment.

Even for those with advanced cancer, new chemotherapy drugs can extend life.

Yet the Oregon Health Plan only offers coverage for chemo that cures cancer - not if it can prolong a patient's life.

"We are looking at today's ... 2008 treatment, but we're using 1993 standards," Fryefield said. "When the Oregon Health Plan was created, it was 15 years ago, and there were not all the chemotherapy drugs that there are today."

Patients like Wagner can appeal a decision if they are denied coverage. Wagner appealed twice but lost both times.

However, her doctors contacted the pharmaceutical company, Genentech, which agreed to give her the medication without charging her. But doctors told us, that is unusual for a company to give away such an expensive medication.