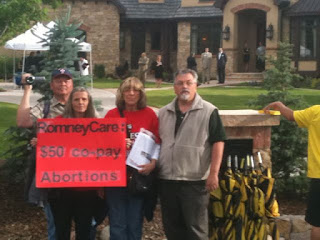 15 stalwart activists for babies in the womb, spent several hours in Cherry Hills Village, yesterday, educating Colorado Republicans about the record of Mitt Romney, father of $50 co-pay abortions in Massachusetts.

The tony guest list featured host committee members, former US Senator Wayne Allard, former Congressman Bob Beauprez, CO AG, John Suthers ~ all who claim to be prolife. Is it really so easy for them to turn a blind eye to the painful plight of the 4,000 pre-born babies killed by abortion daily, that any lie about a candidate's foundational beliefs will suffice?

Are dismembered babies such an abstraction in the American mind, that it's now considered classy and sophisticated to relegate our posterity to a $50 co-pay death?

Were this Nazi Germany, would "Christians" have been respected for putting on their finest garb to mingle with Mengele and Herr Fuhrer?

Mitt Romney's record is exhaustively detailed at Prolifeprofiles.com/romney for any and all to see, if they care at all about the future of this nation.

As a Republican national delegate in 1992, we fought for the pro-life plank in the platform as has been successfully done in the nearly twenty years hence ~ to what end? Republican nominee, Bob Dole, told us he hadn't read the platform and wasn't bound by it. John McCain promoted immoral research on our tiniest citizens, on a par with the most horrific "scientific" experiments the German national conscience could conceive.

Denver's gussied guests may have had a hard time hearing what Mitt was selling, over the chants of, "Mitt funds abortion" but they are now without excuse when deciding who the Republican nominee should be.

God Almighty warns us in Proverbs 24:11 to, "rescue those unjustly sentenced to death." Some take that seriously, others ignore it at their own soul's peril. 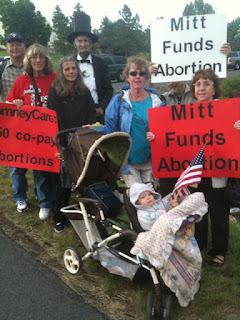